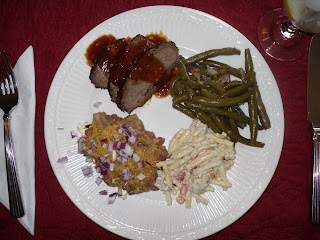 Texas Style Beef Brisket, Southern Style Green Beans,
Pinto Beans topped cheese and diced onion, and Macaroni Salad from the deli
I had a beef brisket that I wanted to make using a recipe that I have used before with flavorful success, and since I have been into pairing appropriate regional dishes together, I wanted something just right to go with the "Texas style" that I had in mind.  I have never been to Texas so I asked Ben's uncle Dave, who lives in south Texas, for some help.  Dave (a reader since the beginning, WAY back in October) came through for me and gave more suggestions than I could possibly make for one meal.  The interesting thing was the similarity between his suggestions and many of the foods I grew up eating (except we only put onions on our pinto beans, not the cheese); I guess those southern roots are strong :) Ben said he really liked my "hillbilly" green beans, and said that he had never had them that way before.
I would like to thank Dave for both his input and support, it is much appreciated.
Texas Style Beef Brisket
Adapted from Easy Home Cooking: Slow Cooker Recipes 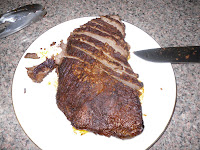 Trim off excess fat and place beef in a gallon zip bag.  Make a paste of the Worcestershire and seasonings; spread over the meat and massage in thoroughly.  Seal and refrigerate 12 to 24 hours.
Place the meat and marinade in your crockpot and cook on low for 6 hours; do not add any liquid.  Remove meat from the crockpot, slice thinly against the grain, cover and set aside until serving.  If desired, skim the fat from the liquid; stir in the BBQ sauce and turn heat to high long enough to heat through.  Serve the sliced beef with the warm sauce, on your plate like roast, or in a bun for a BBQ sandwich.

The BBQ sauce I used was some leftover Kick-Ass BBQ Sauce that I had stashed away int he freezer, and I have included the recipe below.  try it, you'll like it, but you'll find that it makes too much to use in a week, so just freeze the rest for later. 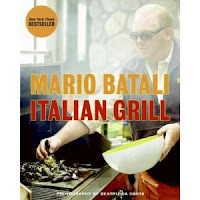 Combine all the ingredients in a large heavy sauce pan and bring to a boil over medium heat.  Reduce heat and simmer for 10 minutes, stirring frequently.  Remove from the heat and let cool.  This makes about 3 cups of sauce and will keep for a week in the fridge, or 6 months in the freezer.

When I ate these growing up, they often were cooked with onion and diced potatoes thrown in the mix.  This is tasty indeed, but I figured Chris would complain, so I kept it simple. 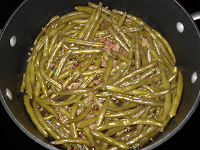 In a medium saucepan, saute the bacon until crisp; remove and set aside, reserving the drippings in the pan.  Add the beans and stock, add enough water to just come up to the surface of the beans (shouldn't be much).  Bring to a boil, reduce heat, cover and simmer for an hour or two (they should be soft, but not mushy).  Just before serving, remove cover, raise the heat and reduce the remaining liquid so that little remains.  Crumble the reserved bacon, toss it in, and serve. 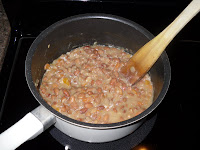 I made these the way I usually make beans, but added a big handful of finely diced up carrot to the onions before I sweated them to make them more like soup beans, rather than "re-fried" beans (truly, I should have had a bit of ham in there too).
at 3:54 PM