I knew I wanted to indulge on Saturday night, albeit reasonably, so I was good all week, saved my points. and was it ever worth it :)  We had our Skinny Ritas, and Creamy Guacamole with baked tortilla chips, hummus with baby carrots and whole grain crackers, and sweet and spicy wasabi peanuts.

The final indulgence for the evening was a chocolate molten cake...think gooey brownie and you know what I'm talking about.  I have been wanting to make something like this for a long time, but for some reason thought it would be difficult or time consuming.  Then I found Mark Bittman's  article and video in the NYT and knew the time had come.  (As a side note_ I love Bittman and his straight forward approach to cooking).

This recipe requires only five ingredients and is incredibly easy to make.  Pay close attention to the baking and don't do as I did- at seven minutes it didn't look done enough so I gave it the nine.  The interior was still very soft, but not "molten" as had been my desire.  That aside, this cake was deliciously sinful and worth the points hit I took.  I will be making this again for the family, but may cut the amount of sugar a bit to get more of the dark chocolate bitterness that we (okay. I mean me) love so much.

Put the butter in a medium bowl and melt it in the microwave. Add the chocolate to the hot butter and stir until melted.Crack 2 eggs into a bowl, and add 2 more yolks (reserve the extra whites for another use).  Add the sugar, and beat or whisk until light and thick, about 1 minute.  Add egg mixture and 2 teaspoons flour to the melted chocolate; beat until combined. 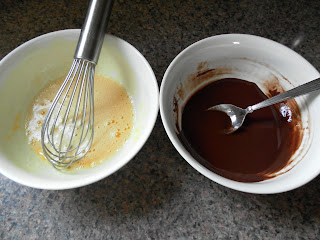 Butter and lightly flour four 4-ounce molds or ramekins (make sure not to miss any spots, or the cakes will stick). Tap out the excess flour.  Divide the batter among the molds. (At this point you can refrigerate them for up to 3 hours; just bring them back to room temperature before baking.)

When you’re ready to bake, heat the oven to 450 degrees F.  Put the molds on a rimmed baking sheet and bake until the cakes have puffed up a bit, the tops are barely set and the cakes still jiggle slightly when shaken, 7 to 9 minutes (better underbaked than overbaked).  Let sit for 1 minute,  Put a plate on top of the ramekin and (with a potholder to protect your hand) carefully invert the cake onto the plate.  Let it sit for 10 seconds, then lift up the ramekin.  Serve immediately, with ice cream, sorbet, whipped cream, or just a simple dusting of powdered sugar.

WW PontsPlus - Each cake is 11 points.  Using stevia instead of sugar would bring it down to 10 points.
at 9:50 AM No comments:

This guacamole recipe I made both the husband the best friend try without knowing what was in it.  It is creamy, delicious, diet friendly, and it DOESN'T TURN BROWN like most guacamole.  The secret?  Cottage cheese.  Yes, cottage cheese.

I found this recipe in an article about 25 Uses for Cottage Cheese.  Fat free cottage cheese has become a recent favorite, so I had to read this article (and bookmarked four different recipes from it).  I have made this recipe three times since, the last time adding a second jalapeño, making it perfect for Ben and I.  I am also going to try this thinned out as a salad dressing, my version of Green Goddess.

I've adapted the recipe a bit (but of course), because who really uses a tablespoon of chopped scallion and 3/4 teaspoon of jajapeño?  Use the whole thing and actually be able to taste it.  You can find the original recipe here.

Put all the ingredients in a food processor and puree until smooth.  Makes 1 1/2cups. 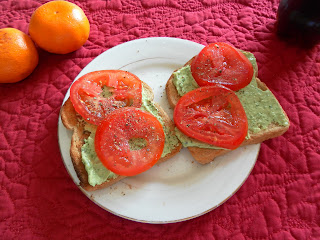 This guacamole was delicious spread on whole wheat toast with salt and peppered tomato slices, something I usually do with hummus.
at 2:21 PM No comments:

Girl's nights are great.  Is there a better way to spend an evening than with a girlfriend (or more), sipping adult beverages, nibbling on tasty bites, and just talking?  It is hard to beat.  I spent Saturday evening, and late into the night (sorry to keep her so late Mr. M), with one of the best friends a girl could ask for, and over the next few posts I'll be sharing some of our treats from the night.

If you know me at all, you know that I much prefer my adult beverages on the dry side, and I find that premade cocktail mixes are entirely too sweet.  I've written before about creating the perfect margarita, but when I went to make one last week I found that I was out of triple sec.  This actually ended up being a good thing because it led to the "Skinny Rita," a margarita that could not be lower in calories and still contain the all important tequila.  Please don't turn your nose up at the use of bottled lime juice.  I don't know about you, but I don't want to squeeze enough limes to get the juice necessary for multiple cocktails, and I assure you, it tastes better than any mix on the market.  And for the calories?  The juice adds minimal calories, so you are really only getting those from the tequila.  Give it a try and let me know what you think. 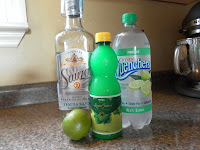 Pour the tequila and lime juice over ice in a salt rimmed glass (optional), with a lime wedge.  Top off the glass with the desired amount of sparkling water, just give it a twirl with your finger in the glass.

WW PointsPlus Breakdown - Each cocktail is 5 points
at 9:33 AM No comments:

Was that ever good!!

Happy Mother's Day to all the beautiful mothers out there.  I told Ben this morning I had dreamt that he and Christopher had hidden some flowers for me.  His answer was that they had hidden them all over the yard in the flower beds.  Oh well, so much for the not so subtle hint.  What I did get this morning was a most delicious baked egg dish from skinnytaste that I had posted to his Facebook wall earlier this week.  Sometimes you can't be subtle, you just have to show them what you want :)

Ben found this dish easy to make, but if you like your eggs runny like he does, you will want to decrease the baking time a bit.  This recipe is a definite keeper and would make for a great dinner, too.  The next time we have it we are adding a bit of minced garlic and red pepper flake to the spinach, and sprinkling the cheese on top rather than mixing it in (it did get a bit lost).  The addition of a tomato slice or two under the spinach would be fantastic, especially once summer tomatoes are here.  Come on summer!

Preheat an oven to 400°F. Lightly spritz four oven-safe dishes or ramekins with cooking spray.  Heat a large nonstick skillet over medium-low heat, add oil, shallots and cook 2-3 minutes.  Add spinach, salt and pepper and cook until the spinach wilts, about 2-3 minutes.  Mix in cheese and remove from heat.
Divide the wilted spinach among the oven-safe dishes, making a well or two in the center of each.  Break an egg into each well and season with salt and pepper.  Place the ramekins on one or two rimmed baking sheets and bake until the whites are set and the yolks are firm around the edges but still soft in the center, about 17 minutes or to your liking. Serve immediately.  These were perfect with a toasted light whole grain English muffin on the side.

WW PointsPlus
One quarter of the spinach with one eggs is 4 points, two eggs are 6 points.  A light whole grain English muffin is 2 points.

Today, Tuesday, May 7, is National Teacher Appreciation Day, and Christopher's school is having an appreciation lunch today.  Recruited by a friend to provide a dish for the luncheon, I said yes with no hesitation.  Teachers are beautiful, hardworking people who have chosen a difficult and under-appreciated profession, so there was no question that I would help out.  And my son's teachers?  Well, they put up with him, so enough said  :)

But then she said she wanted a desert.

I had assumed she wanted a savory dish (and we all know he saying about assumptions).  Regular readers know that deserts are not my forte and I rarely make them...to the deprivation of my children according to the above mentioned Christopher.  Ben suggested mini cheesecakes which sounded like a fine idea.  He also suggested full fat, full sugar ones, which didn't sound like such a fine idea.  This recipe is for 12, so double or triple if necessary. 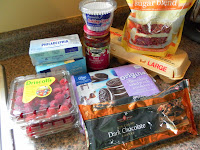 Preheat the oven to 350 degrees F.  Cream the sugar blend, salt, vanilla and cream cheese with a mixer until well blended and fluffy.  Introduce the eggs one at a time and mix until well incorporated.  Line a (1/2 cup-12 capacity or two 6 capacity) muffin tin with foil  cupcake liners.  Place a small chocolate wafer cookie into the bottom of each cup. 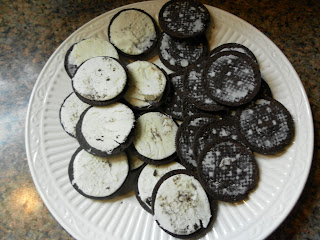 Note:  The wafer cookies I found at Kroger were too large for the liners, so I dismantled some store brand "Oreos" and used the stuffing free half for this purpose.  The stuffed halves I stuck together to make "double stuffeds" and let the boy have them. 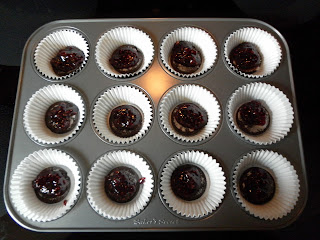 Top each cookie with a teaspoon of the raspberry preserves (you could sub sugar free preserves here easily). 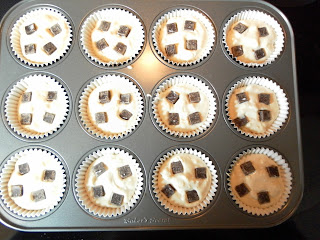 Divide the cheesecake batter evenly among the liners and top each "cake" with 4 chocolate chunks, pressing them into the surface of the batter.  Bake for 20 to 25 minutes, or until almost set- they will still be a bit jiggly, but will firm when chilled. Remove from the oven and let cool at least a half hour so they are no longer hot to the touch.  In a microwave safe bowl, warm one tablespoon raspberry preserves with a splash of water just long enough to melt, about 15 seconds.  Stir to make a glaze for the raspberries and very GENTLY toss in the berries to coat lightly (a heavy hand here will mash the berries, and while still delicious, it would not be as pretty). Top each cake with an equal portion of the glazed berries, probably 3 or 4 berries each.   Refrigerate until ready to serve. 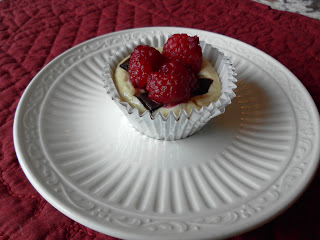 Doesn't that look good?  Now if I had only thought to pick up some fresh mint with which to garnish. 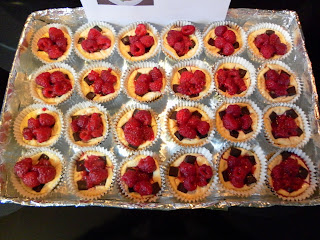 Packaged for safe transport to school.  I used one of those short boxes that contain condensed soups at the grocery and covered it with foil.  The perfect size for two dozen cakes so I'll be stashing a few of these aside when I find them.

These were 5 points each as made.
If you use all fat free cream cheese they would be 4 points, and also using stevia instead of the sugar blend would bring them down to a miserly 3 points each.  I plan to make some plain ones (Ben's preference) in this manner, but will sub gingersnaps for the chocolate wafers and add a tablespoon of lemon juice to the batter.