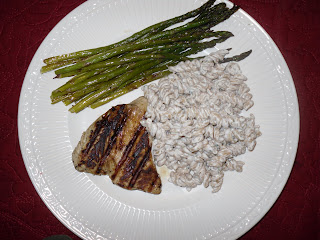 Wednesday had been so nice (70 degrees and sunny!!), that I wanted to grill and eat outside on Thursday.  I arose that morning to a bit of gloom and drizzle, but the sun was trying to peek out, so I went ahead that morning and got the chicken marinating.  Come dinner time, and not only had the sun failed to emerge from hiding, but it was RAINING (boooo, boooo).  Ben suggested that we could go out to eat, but I don't like to even leave the house if it is raining, so I got the George Foreman out and proceeded with dinner.  Real grilling is definitely preferable, but this little gadget gets the job done in a pinch.  We had the lemon and olive oil marinated chicken (one of my favorite preps for chicken) with some simply roasted asparagus, and a variation of Michael Symon's mac and cheese recipe.  We didn't grill or eat outside, but we still ate well :)

Cook the pasta in salted water until al dente.  In a large saucepan, bring the cream, rosemary, and 1/2 tsp. salt to a simmer and reduce the mixture by half.  Add the goat cheese and chicken to the cream and cook until it coats the back of a spoon, about 30 minutes; toss with the pasta.

When I made it the first time (served with  braised beef, steamed asparagus, and roasted tomato sauce), I used regular bow tie pasta instead of the rigatoni, halved the amount of cream, and used 2 teaspoons dried rosemary, crushed.   I skipped the reducing and merely melted the goat cheese into it once it was at a simmer.  I did not add the chicken, nor did I cook it for 30 minutes.  The result was so good that I couldn't imagine how rich the original must be (my heart and pocketbook both nix the idea of making it myself). 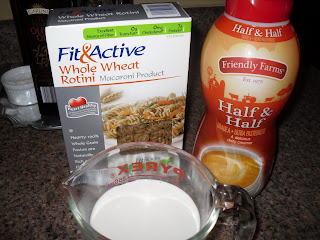 This time I substituted a whole wheat rotini for the regular (semolina) pasta, and half and half for the cream (healthier and cheaper yet).  Again, I used the dried rosemary, and did not add the chicken, but served grilled chicken on the side.This was still delicious, with the sauce still creamy and rich.  The taste difference was in the pasta, but if you like whole wheat/grain pastas, this is certainly a viable option. 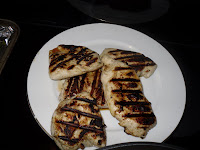 In a gallon zipper bag combine the juice, oil, and seasonings- how much you use depends on how much chicken you are marinating, and how much you like garlic- the important thing is the equal ratio of juice to oil.  Add the chicken (bone in or boneless, whatever you like or have) and marinate for a least a few hours in the fridge, and even overnight.  Grill, eat, enjoy.

For a Latin American Flavor
Use the same procedure, but substitute lime juice for the lemon, and cumin for the thyme.

Budget Minders and Tips
While obviously, fresh is best, it is not always the most economical and practical.  I keep bottled lemon and lime juice in the fridge, as well as a (big) jar of pre-minced garlic.  For this recipe (or any other involving strong flavors), I would not use any oil rather than olive oil because of the flavor it imparts, but I would use regular olive oil, not the more expensive extra virgin.
While not used here, another item to keep around is a jar of ground ginger (get it in the produce department).  There is a good chance that I will have a least one lemon or lime in the house, but I only have fresh ginger if I have purchased it for a specific recipe- the little jar fills in for those times when I only  need a small amount of "fresh" ginger. 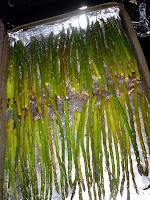 Preheat the oven to 450 degrees and line a baking sheet with foil.  Wash and thoroughly dry the asparagus, snap off the tough ends.  Spread in a single layer on the baking sheet and brush lightly with the oil.  Season liberally with the salt and pepper.  Roast until desired doneness- this will depend on the thickness of the spears, and how crisp you wish the final product to remain, but it doesn't take long.  This is particularly good if you serve lemon wedges alongside- the squirt of lemon adds a wonderful freshness and nice acidic bite.
at 2:53 PM