Changin' it up and finding a very pleasant surprise...

Bake in May I had made some Chocolate Raspberry Cheesecake Minis for National teacher's appreciation day.  These low fat, low sugar treats were delicious and well worth the 5 Wight Watchers PointPlus that they tallied in at.  I mentioned that cutting the fat and sugar yet more could bring them down to 3 points.  For Mother's Day (yes, I made my own desert) I made the minis again, using all fat free cream cheese and subbing ginger snaps for the chocolate wafer cookies and stevia for the splenda-sugar blend.  These were delicious topped with fresh raspberries and I don't think the friend I had over for coffee later in the week even noticed they were "diet friendly."  In fact, she asked for a second!

Fast forward a month and I asked Ben what he wanted as his Father's Day desert.  Without much thought he declared he wanted a key lime cheesecake.  If you search the web for recipes, key lime cheesecake seems to involve separate layers of lime custard and cheesecake, not exactly what I had in mind.  Remembering my success the previous month with the super friendly cheesecake minis, I decided that I would take those and infuse them with lime flavor through the use of fresh juice and zest. 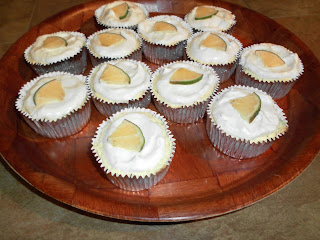 The verdict?  Another home run! The lime taste was very present, without overpowering the cheesecake.  It is not visible in any of the photos, but the lime zest added pretty little green flecks to the cheesecake.  I was afraid that I would need additional sweetener with the use of the lime juice, but any loss in sweetness was corrected by the bit of fat free Cool Whip, so perfection was achieved. 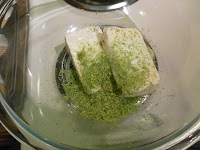 Preheat the oven to 350 degrees F.  Cream the stevis, salt, lime zest and cream cheese with a mixer until well blended and fluffy.  Introduce the eggs one at a time and mix until well incorporated; add the lime juice and stir to incorporate.  Line a (1/2 cup-12 capacity or two 6 capacity) muffin tin with foil  cupcake liners.  Place a vanilla wafer cookie into the bottom of each cup.
Divide the cheesecake batter evenly among the liners.  Bake for 20 to 25 minutes, or until almost set- they will still be a bit jiggly, but will firm when chilled. Remove from the oven and let cool at least a half hour so they are no longer hot to the touch and then place in the fridge until completely chilled.  Once chilled, top beach mini with a tablespoon of the Cool Whip, spreading carefully to cover the surface.   Refrigerate until ready to serve.  I garnished these with very thin lime slice quarters, but thin curls of lime zest use a vegetable peeler) would have been very pretty,
WW PointsPlus

I was very pleased to find that even with the addition of the Cool Whip and lime juice, that these tallied in even LOWER than the plain minis, ay only 2 points each.  I think we will be having these again (and again).   The 'Nilla wafer cookies are evidently much friendlier than chocolate wafers or gingersnaps.  Who knew?
at 1:53 PM