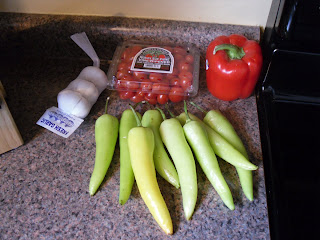 One of the cookbooks I got for Christmas was Michael Symon's "Live to Cook".  I've made a few things now from the book, including his incredibly delicious, but easy, mac & cheese using goat cheese (still need to share that one sometime), and I am dying to try my hand at making my own bacon (yes!).

Another recipe I had been waiting to make was his Spicy Stuffed Peppers, using Hungarian wax peppers, similar to banana peppers.  I had purchased some of these for this use, but lacking the Italian sausage to stuff them with, I made my own using ground turkey (tasty, quick, easy, cheap, and healthy...who could ask for more?).  Symon says to use Sunday Sauce (the recipe is in the book), or a prepared tomato sauce as a base for the peppers.  I made a roasted tomato sauce and added to that a small amount of Spicy Red Pepper Sauce that I had tucked away in the freezer (umm, umm good).  My peppers were obviously not as large as the ones Symon used, because I did not use even close to a pound and a half of the sausage.  A look through the veggie bin uncovered a red bell pepper and two large jalapenos, so I added those to the mix as well (the Christopher was served a piece of the stuffed bell pepper, because at 10, he just doesn't appreciate spicy yet).  Feeling that I wanted it even richer (I do like to spoil myself), I topped the peppers with some sliced fresh mozzarella once they were done and set them back under the broiler for a nice melt.  All three peppers were delicious treated in this manner, with the wax and jalapeno peppers decidedly on the warm side.

We had Caesar salad and a crusty bread to sop up the juices to make this meal complete.  The grownups enjoyed a bottle of Bardolino Chiaretto  (2006), a nice dry Italian rose that offers the lesson that just because a wine is pinkl, it does not mean it's sweet. 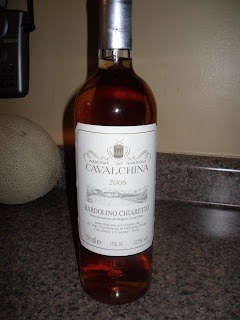 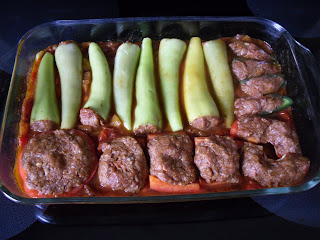 The lineup just before going in the oven. 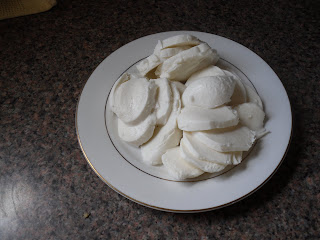 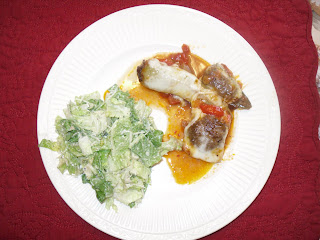 Waiting to be eaten (sorry for the out of focus shot). 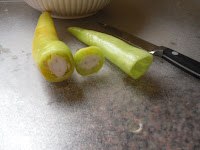 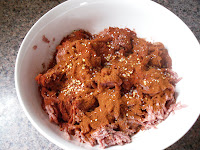 Combine the ground meat with the seasonings at least 3 hours before using to allow the flavors to meld. 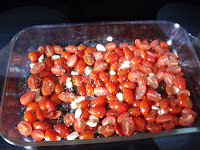 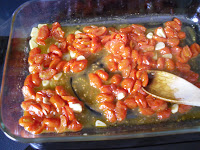 Preheat the oven to 450 degrees.  The amount of tomatoes you use will depend on how much sauce you wish to make (i used a pint here), and the amount of garlic will vary by amount and how much you like garlic (I used 10 cloves here- we love garlic).  Halve the tomatoes and place in a baking dish with the garlic.  You can use other tomatoes diced up, but I find that the small tomatoes add an extra nice sweetness to the sauce.  Drizzle on a fair amount of oil and season liberally with the salt and pepper.  Roast for anywhere between 10 and 30 minutes (I did 15 here), depending again on amount, but also on how juicy you want the finished sauce.  Longer roasting will result in s "drier" sauce, but the flavors will be much more concentrated.  Stir occasionally during the roasting.  These tomatoes are wonderful on pasta, spooned over other veg (such as asparagus spears), or on a good crusty bread.
at 3:27 PM