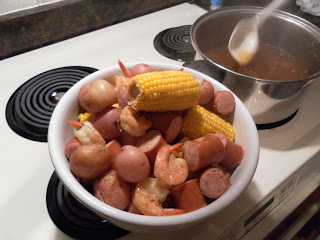 Low Country Boil
When we vacation, we typically rent a villa rather than stay in a hotel.  Not only are we able to feel more "at home" where ever we may be, but we are also able to prepare most of our own meals ourselves.  This is not only a money saving gesture, for quite honestly, our own meals are usually as good (or better) than we would have if we dined out.  One dish we always make whnenwe travel south is the Low Country Boil pictured above (click here for the recipe).  A new addition to the southern repertoire will be the Key lime Pie of the previous post.

Now don't get me wrong...we do enjoy eating out, we are just more selective about our dining dollars than we were in our reckless youth ("reckless" here meaning "before we could cook so well").  On one of our early trips to Hilton Head, we did like most other tourists and ate at the Crazy Crab in Harbor Town, a mediocre tourist trap in the truest sense (if anyone feels that it has improved in the last few years, please let me know.)

This trip we decided to try Chef Robert Irvine's eat!, just across the street from Shipyard Plantation where we were staying.  Ben and I are both fans of Chef Robert's antics on the Food Network, and even the little guy Christopher likes him from Worst Cooks in America.  In ten years of going to Hilton Head, our meal here was probably one of the best we have ever had on the island.  And yes, those are pictures of Chef Robert on the wall, and the waiters were all dressed in short sleeve black polos. showing off their "gun shows."  No one ever said the man had a small ego :)
A basket of crusty bread was served alongside olive oil with a drizzle of balsamic reduction, quite a delicious start and Christopher was "forced" to finish the last piece.  We ordered the fried green tomatoes to share.  Ben does not normally care for this dish (that Chris and I love), but he found these to be quite delicious.  Supposedly the micro-sprouts that came with the tomatoes were very good too, but I wouldn't know since Chris swooped in so quickly and gobbled them up :)  Being a "real" restaurant, there was no children's menu, so Chris ordered the Carolina shrimp and house fries.  The fries (he reported) were good as fries go, but nothing special.  The coconut pecan crusted shrimp, however, he declared to be divine (and I can report that they were huge).  Ben ordered a pork and gnocchi dish he adored, while I ordered the blackened snapper.  I'd give just about anything to know how the red pepper and goat cheese coulis was made...yummy!!  To finish, we ordered the tabasco ice cream.  Ben and Chris said they got a hint of the tabasco; I didn't, but did find it to be a very delicious cinnamon ice cream.  Overall, a very pleasurable experience and we will be returning.

Another place i have to mention is the Palmetto Bay Sunrise Cafe where we had breakfast late one morning.  We will be sure to visit this busy little cafe again (and again).  It was homey, fast, cheap, and delicious...what more could one want in a breakfast place.  Chris had french toast, Ben had the shrimp hash, and I had a breakfast version of shrimp and grits, complete with red eye gravy and a fried egg on top...yum, yum, yum!!
Okay, looking at the photo now, I'll admit that this is not the prettiest dish ever, but it sure was good!
at 9:14 PM No comments: 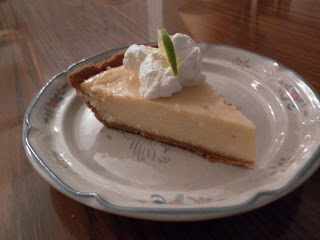 Key Lime Pie
We love key Lime Pie and this is something that we ALWAYS get when we travel down south.  Just days before we left this year I read April's post at Mama Loves Food about this decadent treat.  "Could it really be so simple?" I asked myself.  Well, I decided that I would just have to find out.  On our first grocery trip to Publix I walked past the bakery special of the week, whole key lime Pies for a mere $6.99 each, and sought out the ingredients to make my own (and I ever so glad I did!).  This pie was one of the simplest desserts I have ever made, and undeniably, also one of the tastiest.  I started with the 3/4 cup of key lime juice, and after a taste added another 1/4 cup, resulting in a tarter pie than one will usually be served in a restaurant, but one perfect for us. Serve this pie chilled with a dollop of slightly sweetened whipped cream and you won't be disappointed (and DO NOT use Cool Whip...the real stuff is just sooo much better and a cinch to make).  I'm not ashamed in the least to share that I had the last piece for breakfast before we headed home, perfect with coffee. 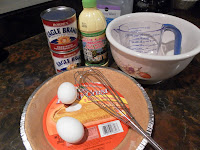 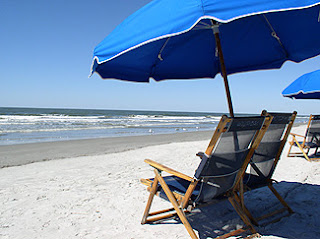 Last summer we went to Edisto Island, SC and had a wonderful time, but this year we head back to Hilton Head, as we have most years.  Something about the place just keeps drawing us back, and it's not Harbor Town or South Beach, as we have no plans to visit either this year.  We do plan on spending many hours on the beach at Shipyard Plantation and pedaling bikes around the many paths.  Also in the plans is dinner one night at chef Robert Irvine's eat! (but never again the overpriced, mediocre Crazy Crab).  Dinner in will most certainly include Low Country Boil, mandatory dining whilst visiting the low country for which it is named.  So, I'll be seein' y'all soon now, ya hear.
at 8:23 AM 1 comment: 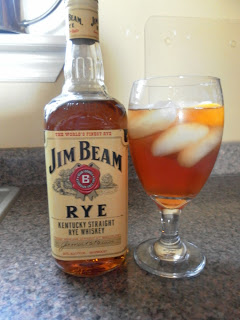 
Summer is here so it is time for easy, breezy adult beverage for the hot, sultry evenings.  Ben had read about Rye whiskey and wanted to give it a try.  We both tried it on the rocks, but found it to be too sweet.  So what to do with a nearly full bottle of Rye?  I looked up recipes for cocktails using Rye, but they all seemed too complicated, and would necessitate the purchase of yet more bottles of liquor (we don't keep much on hand).  Pouring a glass of iced tea one evening, it occurred to me to try it with a shot of the Rye.  Eureka!!  A refreshing and pretty darned tasty use for the Rye...all it needed was a shot of citrus in the form of a big, juicy lemon wedge.
Rye Tea
1 shot Rye Whiskey
tea. sweet or not, your choice (I chose not)
juicy lemon wedge
Fill your desired glass with ice; squeeze a wedge of lemon over the ice before dropping it in the glass.  Add a shot of Rye and top off the glass with tea.  Drink and enjoy :) 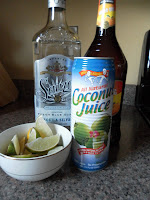 s
Readers of this blog know that I love coconut.  That said, i don't like piña coladas, I find them to be too thick and sweet.  I was shopping a Kroger this week when I found a can of coconut juice.  This set my mind to turning about making a margarita using the juice...I love coconut and I love margaritas, what could be more perfect?  Well, my dear friends, just for you (insert big smile here) I played with the ingredients, did away with the triple sec after the first try, brought in the leftover Coco Lopez on subsequent attempts, and came up with a pretty good Cocorita.

3 shots coconut juice
2 shots tequila blanco (did I mention this was a potent one? :)
1 tsp. Coco Lopez
1 juicy lime wedge

Fill your glass of choice with ice; anchor a juicy wedge of lime on the side.  Into a cocktail shaker add the coconut juice, tequila, and Coco Lopez.  Shake  vigorously a few times and pour over the ice in the glass.  Before drinking, squeeze in the lime and drop the wedge in the glass.  Drink and enjoy :) 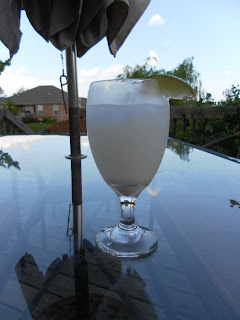