Here I am back in Ohio after my wonderful summer down south.  While the time away is heavenly, there is sooo much to catch up on when I get home, including, apparently, restocking all the kitchen staples.  We were going to a friend's house on Saturday night and I wanted to take a dessert (per the not so subtle hint delivered my the host), and since I was making dessert I wanted something rich and decadent.

Back story here-   I've been on a "diet break" after losing 65 pounds and maintaining it for 2 months.  As the "diet" starts again today for the last 35 pounds, I wanted something really, really naughty.

But, although I wanted this naughty decadence, I did not want to go to the grocery.  I knew I had a pie crust in the freeze, so a pie it was going to be.  My first thought was Key Lime, but alas, no fresh limes, nor even enough bottled lime juice for this.  This got me eying the nearly full bottle of lemon juice in the fridge, so I decided to sub the lemon juice into my standby recipe.  This led to the pantry where I found only one can of sweetened condensed milk, not the necessary two.  Darn!  Now what?

I did find two cans of dulce de leche, a caramelized sweetened condensed milk, and I remembered making something that had combined the two types.  I couldn't find anything in my recipe directory, but that was because it was in my "yet to be blogged" folder ( I really, really need to get that caught up, too).  The recipe in question was for a chocolate and peanut butter fudge... 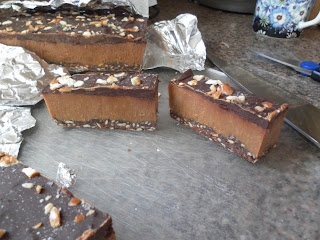 But I had no chocolate in the house, grrr!  I decided then to use both cans of dulch de leche to make the custard base and mix peanut butter into that to create a caramel peanut butter pie.  I went to grab the peanut butter from the pantry, because everyone has peanut butter in their pantry (right?), and all I found was a jar that had granola mixed into it.  What the heck?  But the decision had been made, so that was it, granola and all.  The granola floated to the top of the custard, but that was hidden by whipped topping, and with the addition of chopped peanuts on top, wasn't even noticed. 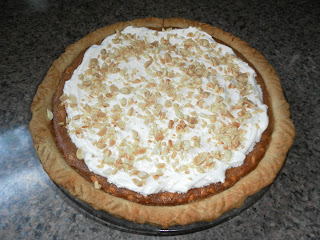 After all that, the pie turned out fantastically, with the host finding it "to die for" and having two slices(!!).  This pie is very sweet and rich, so I would strongly smaller slices than the eight I cut this in to (I could only eat half). 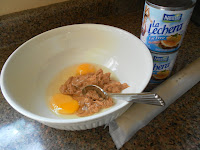 Combine key dulce de leche, peanut butter, and eggs in a bowl and whisk until the ingredients are well blended.  Pour into the pie crust and bake at 375 degrees for 40-45 minutes, or until just barely set.  Allow to cool, serve with whipped cream or topping (I used Cool Whip Lite, also found in the freezer) and chopped peanuts (I used unsalted dry roasted, but I think salted ones would have been very nice).