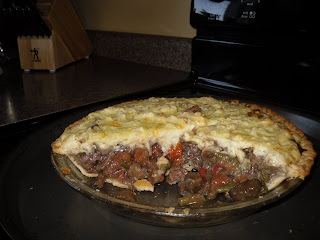 Shepherd's Pie Gone Upscale
The first time I had Shepherd's Pie was when I was in Scotland as an exchange student during high school.  Somehow, this thrifty casserole of minced beef, veggies, and gravy, topped by a mashed potato "crust" was never in my mother's repertoire.  I made this dish (or simple variations) quite often in my early days of cooking (when I couldn't cook very well, and didn't have much money to do it with), but the dish fell from favor as both my kitchen skills and income increased.
When I packaged up the leftovers from the braised beef shanks the other day, I shredded up the beef and cut the green beans into smaller pieces, before mixing it all together.  I figured I would make a stew or something.  When I went to make dinner Tuesday, I found not only the beef mixture in the fridge, but also some of those completely decadent garlic smashed potatoes (remember the cream cheese?), and a single purchased pie crust.  I have made wonderfully delicious potpies before using leftovers, so I thought I would make a beef one, but with a potato top crust.  Also in the fridge were the remains of the roasted red peppers from last week, so I stirred those into the mix too.  After a little cheese, more for color than taste, and an egg as a binder, were mixed into the potatoes, I was ready to layer up a pie.
The end result was definitely nothing like the (lackluster) Shepherd's Pies I had made before, and I think using leftovers in this manner is much more in keeping with the origins of this dish.  The braised beef and veggies were so rich, and the roasted peppers added a very nice extra kick; the potatoes were still wonderful, maybe more so by having the nice bit of crisp on the outside, and I am always a fan of pie crust.  All in all, I think I liked this dish better than the one from which it originated. 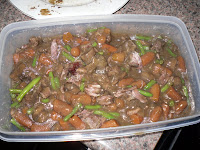 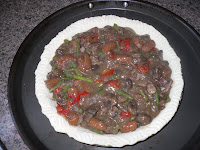 Preheat the oven to 425 degrees.  Mix the potatoes, egg and cheese shreds, set aside.  Shred up the leftover beef and mix with the gravy; stir in veg, cut into smaller pieces if necessary.  Line a pie plate with the single crust, roll under and crimp excess pastry.  Spoon in the beef mixture, spreading it evenly in the pan.  Spread the potato mixture over the beef in an even layer.  Bake for 15 minutes, reduce the temperature to 350 degrees and bake for another 20-30 minutes, or until both the pastry and potatoes are nice and golden brown.  Remove from the oven and let sit for 10 or 15 minutes before slicing.  Serve with a green salad. 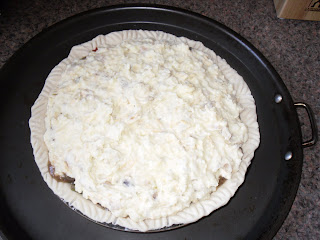 I'm not very good at making the pretty thumb crimps, so I just crimp the edges with a fork.  The potatoes I dropped on by spoonfuls over the surface of the beef and then spread around with a fingertip.  Don't worry about trying to seal the edge completely between the potatoes and crust; if the pie is at all too juicy this will give it a place to bubble out (hence the pan underneath). 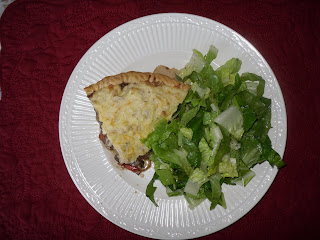 Letting it sit for a short while on the stove top to cool makes it easier to get nice pretty slices (do this with a 2-crust potpie too).  Serve with a green salad and you have a complete meal.
at 12:56 PM