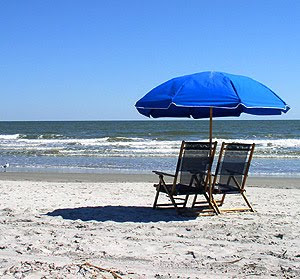 This is NOT snow, in fact,
this is what I am looking forward to once summer va-ca arrives.
Photo courtesy of http://www.destinationvacationhhi.com/Forest-Beach.htm
Snow >:-(   Yep, that's my Facebook status for today.  After a stretch of near 70 degree days, I awake this morning to a cold and windy 30 degree outside temperature, and, yes, snow on the ground (sigh...).  I had planned to grill some pork ribs yesterday, but found those plans derailed by rain, and now this.  Oh well, that's what we get for living in Ohio (someday, oh, someday...).

As I said, I had a nice package of country style pork ribs that I had marinating with the intention of throwing them on the grill for dinner.  These ribs, having been frozen and thawed, had to be used, rain or no rain.  Some slow and low cooking in the oven produced a tender rib that, while not as good as grilled (at least to my mind), was still very tasty.  To accompany these ribs I cooked up a pot of collard greens (couldn't be in a hurry now, could I?), and threw together a super easy and tasty corn pudding.  It may be cold outside, but our tummies were warm and satisfied... 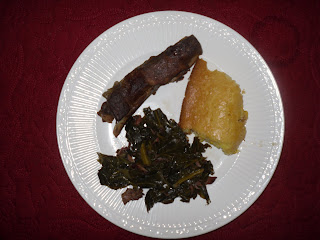 bone-in country style pork ribs, however many you want
seasoning of choice
BBQ sauce of choice 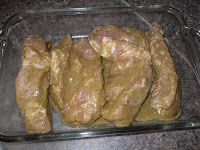 Preheat the oven to 275 degrees.  Lay the ribs in a baking dish, not a sheet pan, large enough to hold them in a single layer.  Rub liberally with seasoning of choice.  I probably would have used a combination of coarse salt, fresh ground black pepper, and lots of minced garlic (plus whatever else struck my fancy at the moment), but as I had already marinated these, I pulled them out of the bag and left as much of the liquid behind as I could.  Cover the dish tightly with foil and bake undisturbed for 2 hours.  After that time, remove the foil and drain off any liquid that has accumulated in the dish.  Cover the ribs liberally with your favorite sauce and return to the oven for another hour.  Serve.  I reserved my marinade, which had been a combination of a mustard based bbq sauce and a roasted garlic balsamic vinaigrette (both home made) that I had floating around in the fridge.  I poured the remainder of the marinade over the ribs in lieu of a bbq sauce and they turned out very nicely.

I've already done this one, so to see the recipe just click here. 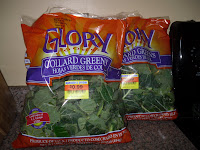 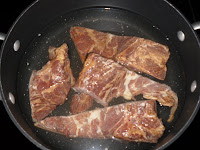 Place the ham hocks or neck bones in a large pot with a lid.  Cover with enough cold water to cover and bring to a boil, skimming off any foam that may rise to the top.  Cover and reduce heat, simmer for an hour or so. until the water is flavored and the meat is falling off the bone tender.  Remove the meat and bones to a plate to cool and add the vinegar and sugar to the stock.  Add the greens by handfuls, letting them wilt in between, until you are able to get them all in the pot.  Cover and simmer.  Once ham hocks or necks are cool enough to handle, remove the meat from the bones and shred into small pieces.  Add the meat bits to the greens and continue simmering until desired doneness; adding beef stock if the pot seems to need more liquid.  When the greens have reached the desired tenderness, taste for seasoning- you most certainly will not need salt, but you may desire an additional splash of vinegar or sprinkling of red pepper flakes.  If they are "wetter" than you would like, just uncover and raise the heat for a few minutes  to boil off the excess liquid. 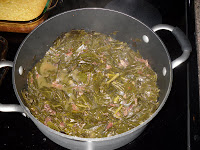 Note:  If you use mustard or turnip greens, the cooking time can be very short and you probably will not have to add additional stock.  If you use collard greens, however, you will need to simmer them for quite a long time, even for several hours, and you will most certainly have to add additional liquid for cooking.  How "wet" you leave the finished greens is a matter of personal taste, but the "pot liquor" is prized in southern dining.
at 12:07 PM