These mushrooms need to be used... 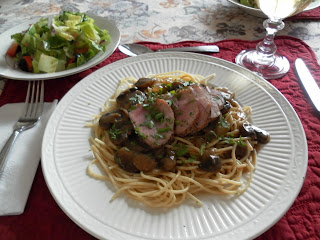 Peppered Pork Marsala
I had bought a pound of mushrooms at a fantastic price, stuck them in the fridge, and then had a few days spell of not cooking (hey, it happens).  Now I had the mushrooms sitting on the counter, contemplating what to do with these before they perished.  I have been craving pasta of late, so I decided to do a marsala dish, but changed it up a bit by using a peppered pork tenderloin thrown on the grill, instead of the usual chicken.  This was a tasty adaptation, and one certainly worth repeating.
Peppered Pork Marsala 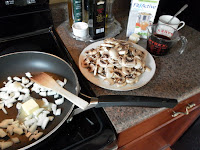 1 pork tenderloin, about 1 lb. (see note)
1 14-16 oz. pkg. spaghetti (I used whole grain)
1 lb. mushrooms, wiped, trimmed, and sliced
1 medium onion, diced (I used a vidalia)
4 tbs. butter, divided
coarse salt and fresh ground black pepper, to taste
1 cup Marsala
1 cup chicken stock
2 tbs, cornstarch
Grill the pork until barely cooked through , or to desired doneness (it is safe to eat today's pork with a tinge of pink in the middle).  Alternatively, brown it on all sides in a heavy skillet (like cast iron) before finishing it in a 35o degree F oven for 20 minutes.   However you cook it, be sure to let it rest 5-10 minutes before slicing it very thinly.   Cook the pasta al dente. rinse, and set aside to keep warm. 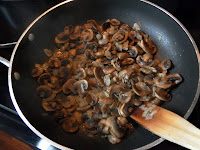 For the sauce:  Saute the onions over medium heat in 2 tablespoons butter until tender and just turning golden, 10-12 minutes.  Add the mushrooms and saute until they have released their liquid and become quite dry (think concentrated flavor :).  Season fairly generously with the salt and pepper, add the wine and stock.  Bring to a boil and cook for a few minutes, more to cook off some of the alcohol and blend flavors than to reduce.  Measure the cornstarch into a small cup or bowl and mix with a few tablespoons of stock or water to make a slurry.  Reduce the heat to med-low and stir in the slurry; cook for a minute or two to thicken.  Taste to adjust seasoning and turn off the heat before stirring in the last 2 tablespoons butter.  Serve immediately.
To serve:  Portion the cooked spaghetti onto plates and spoon over the sauce.  Fan some of the thinly sliced pork over the top and a sprinkling of chopped fresh parsley.  By slicing the pork thin I was able to get 5 servings from a scant pound of pork with no complaints.  Serve with a green salad. 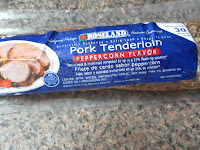 Note:  For ease of preparation, you may choose to use a premarinated tenderloin as I did, but if you would prefer to use one not already marinated, just rub it with some olive oil before rolling it in crushed peppercorns mixed with a generous amount of coarse salt.  While you could do this just before cooking, the pork will be more flavorful if you can do it several hours before hand, or even the day before.  I have used this method and it gives you very tasty pork You can also rub the meat with dijon mustard instead of the oil, and come to think of it, a bit of dijon whisked into the sauce would have been very nice.
at 8:15 AM