For the Brussels sprouts haters out there... 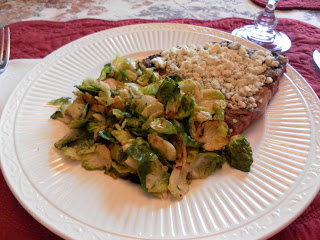 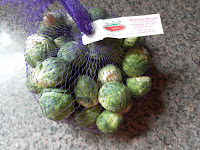 I like Brussels sprouts just fine, as do Ben and Nicole, but Matt and Chris do not (although I blame Chris's dislike on hearing his brother state years ago That HE didn't like them).  One of the latest cooking show rages is to saute the sprouts with bacon or pancetta...and the promise is always that this is a dish for those who swear they hate Brussels sprouts.  I like the sprouts anyway, and bacon is always good...so if this would make the boys like them too, than all the better. 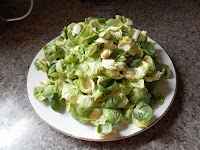 I halved these and broke them apart into leaves before cooking, which was a little time consuming, but I really liked how this allowed more of the sprouts to brown up into caramelized goodness, so it was worth the effort.  Now if I could say they were a hit with the boys (big sigh)...  Matt wasn't home to try them and Chris only ate them begrudgedly, still convinced he didn't like them before one bacon glazed leaf ever touched his lips.  Oh well, the rest of us really liked them...
Bacon Sauteed Brussels Sprouts
1 1lb. pkg. fresh Brussels Sprouts (if you have a choice, get the smallest ones you can get)
1/4 lb. bacon, diced
coarse salt & fresh ground black pepper
Wash and dry the sprouts; with a paring knife, halve and cut out the bit of core before breaking apart into leaves.  In a large non-stick pan saute the bacon over medium heat until crispy; remove to a paper towel lined plate, reserving the drippings in the pan.  Add the leaves, season with salt and pepper, and saute over medium heat until cooked to your preference (I like a lot of browning but don't want them too soft).  Just before serving toss in the reserved bacon.  One pound of sprouts will give you four generous servings.
at 10:04 AM