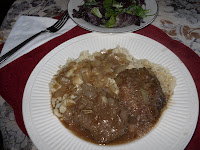 Skillet Sauerbraten with Spatzle
I had purchased a package of gingersnaps a while back with the intention of making sauerbraten, and the cookies sat in the pantry undisturbed until Christopher found them.  I told the boy that once I had made the meal that the cookies would be fair game.  After several days of him looking at the cookies longingly, I told the boy I would make the dish and then he could quench his desire for the darn things.  The recipe I usually use for sauerbraten uses a  rump roast and takes three days to make (marinate).  Not having the roast, or three days, I made a skillet version with similar flavors, but using quick cooking cube steak (I did have some of those in the freezer).  The only thing you can serve with sauerbraten is spatzle, a simple egg noodle, and one that is super easy to make at home.  The skillet sauerbraten did not have the same depth of flavor as the traditional version, but was still very tasty, and one worth remembering as a quick and easy recipe.  The spatzle, as usual, was fabulous covered in the pan gravy.  I am going to include the recipe for the traditional version as well because it is certainly worth trying if you have the time. 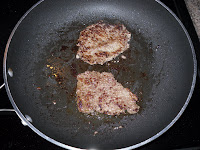 Before you do anything else, liberally season the steaks with salt and pepper; let sit on the counter while you gather your ingredients and dice the onion.  Heat some oil in a skillet (you won't need much if you use a nonstick pan) over medium high heat. Sear the steaks 2 or 3 at a time (don't crowd pan) for 2 minutes each side; remove to a plate, cover and keep warm.  Once the steaks are cooked, adding oil as necessary, stir in the onion and bay leaf.  Cook over high heat about 10 minutes, or until nicely browned.  Stir in the remaining ingredients, scrapping up any brown bits on the bottom of the pan.  Cook for several minutes, until thickened to a ice gravy.  Return the steaks to the pan, along with any juices on the plate, cook only long enough to heat through (if you cook the steaks too long they will become tough).  Serve over spatzle, or alternatively, egg noodles or mashed potatoes.

Mix the ingredients,  With a wooden spoon or stiff spatula, push the batter through a colander with large holes directly into boiling water.  Cook, uncovered, 5 to 10 minutes until spatzle are tender but firm.  Remove with a slotted spoon. 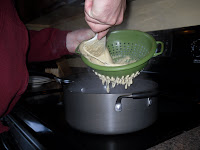 This is Ben pushing the dough through the colander- we took turns. 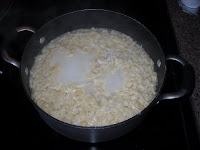 As they cook, they float to the top.

Traditional Sauerbraten
1 cup beer
1 cup red wine vinegar
1 large onion, sliced
1/2 lemon, sliced
8 whole cloves
4 whole black peppercorns, crushed
3 bay leaves
2 tsp. sugar
1 tsp. salt
1/4 tsp. ground ginger
1 3lb. boneless beef rump roast
1 tbs. canola oil
1/2 cup chopped onion
1/2 cup chopped carrot
3/4 cup gingersnap crumbs (7 or 8)
Place the first 10 ingredients in a gallon zip-lock bag; add the roast and store in the refrigerator for three days, turning occasionally.  Remove meat and pat dry; in a Dutch oven or large skillet, brown the meat on all sides in the oil.  Strain the marinade to remove the solids and add to the pan with the chopped veg.  Cover and simmer 1 1/2 to 2 hours, or until the meat is tender. Remove the meat to a serving platter, cover to keep warm.  Add the gingersnap crumbs to the liquid and stir until thickened.  Serve over the sliced roast and spatzle.
Both the spatzle and traditional sauerbraten recipes are adapted from a Better Home and Gardens  publication Simply Perfect Pasta (1995).
at 10:35 AM