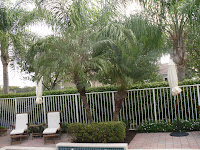 The view across the pool.
It's Tuesday, another snow day (grrr), and we got back late last night from our long (5 day!) weekend in Delray Beach.  It was a beautiful sunny 72 degrees yesterday, which made leaving all the harder.  We came home to the third snow storm in ten days- how I wish we could have stayed.  I actually started this blog post a few days ago sitting at the counter bar at my in-laws house, but then my mother-in-law mixed up a pitcher of cosmos and, well, the writing ended pretty soon after.  Anyway, I'll just finish below what I started then...

We have been in Delray Beach, Florida for a three days now, and while it is a little chilly here (in the 60's), it sure beats the teens and 20's at home.  Chris had us in the pool right after breakfast our first morning here, where we played for several hours (we were quite the prunes when we finally climbed out).  Everything is green and sunny, with not a hint of snow (can't say I miss it a bit).  I am in full vacation mode (to include afternoon naps!!).  Being in vacation mode, I have done no food prep more involved than spreading chicken salad on bread, but we have eaten at a few fantastic restaurants.

On Thursday night we ate at Anthony's, a coal fired pizza place on Federal Highway in downtown Delray.  This place features food cooked in a coal-fired oven and advertise their pizzas as "well done."We had salad and wings to share (wings were different than what I am used to, but not too bad), then on to the main attraction, the pizza.  The coal ovens reach about 800 degrees and cook a pizza in 3 or 4 minutes (or so I read on all the framed newspaper articles in the lobby), leaving the thin crust decidedly crispy, and just a little charred.  Ben and I shared a mozzarella, tomato, and basil za, while Chris shared a pepperoni one with his grandmother.  Pretty darn good was all I can say- although the half hour wait to get in on a Thursday was pushing it a bit (in my humble opinion anyway). 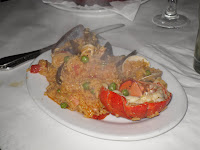 On Friday night we ate at Cabana on East Atlantic Avenue in downtown Delray.  This Latin/Cuban restaurant is fantastic, and would have been worth waiting for (but we had reservations).  We had mariquitas (fried sweet plantains) and  "Cuban" empanadas to share, as well as mojitos all around (some of the best I've had- also very good was a Cuban place in Lido Beach, but I can't remember the name).  Chris even had a "virgin" mojito, but said he didn't like all the "mushy" bits (the mint), although the sugar cane swizzle stick was a hit.  We all had great food, and our waiter Juan was a hoot.  I had the Paella Marinera, an all seafood paella that even included a lobster tail.  This was sooo delicious, and there was so much that I had it the next day for lunch as well.