And the search revealed... 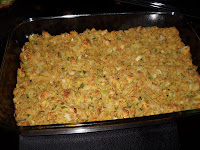 While we were in Florida, Nicole came home from school to dog and house sit.  Knowing that she would still be going to class and work, I wanted to leave her well stocked with leftovers and prepped veg so that she could easily feed herself.  After our horrid drive home Monday night, and the snow day on Tuesday, I wasn't leaving the house for a grocery trip.  After listening to Christopher wax poetic about the lack of milk and cereal in the house (I exaggerate not), I dived into the fridge to see what HAD been left by his dear sister.
First find- a half bag of broccoli spears.  Add to that the handful of baby carrots I found in the veggie bin and I knew that, whatever else, we were having steamed veg for dinner.  Second find- seven leftover corn muffins.  With the now very stale cornbread, my thoughts turned immediately to cornbread stuffing, and sure enough, I even had fresh jalapenos left as well (no danger in her eating those).  Cornbread to me says BBQ pork or chicken, and in the freezer I found a package of boneless country style pork ribs.  A quick defrost in the nukerator and the ribs were ready for a day spent in a spicy sweet bath (ok, a bottled marinade).  As the dinner hour approached, the stuffing baked in the oven, the veggies steamed in the microwave, and the ribs cooked on the Foreman grill (hey, the snow is realllly deep), and we were ready for dinner. 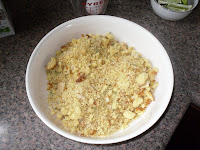 Preheat the oven to 350 degrees.  Sweat the celery, onion, and jalapeno in a small amount of oil, until softened, but do not brown.  To the cornbread crumbles add the veg and seasonings; toss to combine.  Pour one cup of chicken stock into a measuring cup; add the egg and beat well.  Pour the stock and egg over the cornbread and toss to combine.  Add additional stock to moisten the cornbread, but do not make it too wet (you know how moist you like your stuffing).  Spoon lightly into an greased 9x13" baking dish and bake uncovered until golden, about 45 minutes or so (again, you know how you like your stuffing- I like all my surfaces to crisp while leaving the center moist).
at 3:44 PM