We went to our friends Kristy and Ron's house last night for a grown up game night.  I love nights like this with good friends, food times, and good food to nibble on all evening.  Chris had received the game Apples to Apples for Christmas, and it is a fun game to play with your kids, but playing it with your ADULT friends takes the game somewhere else completely.  On the way home (late, very late) last night Chris asked, "Do they understand the cards better than I do?" to which I answered, "No sweetie, they just understand them differently than you do."  Therein lies the difference. 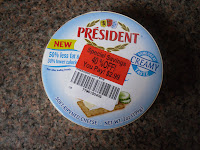 On my last trip to Kroger I had found a small wheel of brie at a reduced price, and not being afraid of the grocery markdowns (in fact, I love them), I grabbed it right up.  I had visions of a baked brie, all bubbly and good, not like the disaster I created the last time I tried this (never having done it before, I thought I would be nice to my family who don't like the rind and remove it- that was a big no,no).  I originally planned to top the Brie with some chunky apricot preserves and slivered almonds, but while getting ready yesterday morning I was watching Ina Garten's program The Barefoot Contessa.  She was making a puff pastry appetizer using goat cheese, pesto, sundried tomatoes, and pine nuts that looked delectable.  Considering that I still had pesto in the fridge that needed to be used, and I had both the tomatoes and the pine nuts in my pantry, I had a (I hoped) delicious change of heart.  I baked this up and took it along.  The brie was very well received- I shall definitely make it again.  Note- the brie I used was a 50% less fat version, that while still quite tasty, did not result in a super soft and creamy interior- the decision on the trade off is entirely yours. 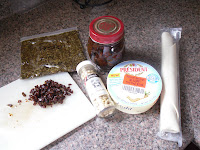 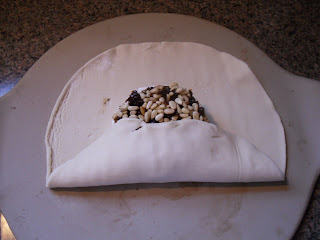 Preheat oven to 425 degrees.Open the pie crust on your counter and lay the brie wheel in the center.  Top the Brie with a few tablespoons prepared pesto, some finely diced sundried tomatoes, and some toasted pine nuts.  Lift one edge of the pie crust to the center of the wheel and then start lifting and folding, completely encasing the Brie 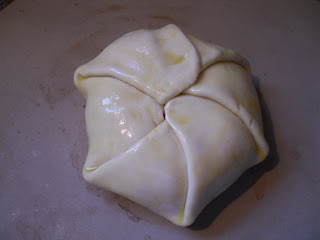 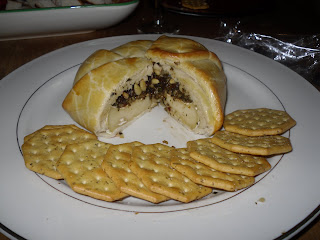 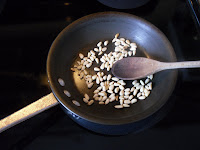 Toasting any kind of nut before using in your recipe will bring out a fuller flavor, and could not be any easier.  If using a small amount, just put in a small dry skillet and toast over med-high heat for a few minutes until golden, stirring often as to not burn the nuts.  If needing a larger quantity, just spread on a dry baking sheet and roast at 400 degrees for a few minutes, or until golden, again stirring frequentl to avoid burning.
at 12:03 PM