A little beer is always good... 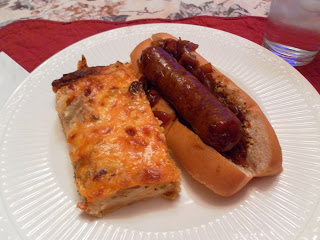 Beer Brat with Caramelized Onions
and Twice Baked Potato Casserole
I found a family pack of brats on sale and knew immediately what I wanted to make...so a trip back to the bakery for some nice hot dog buns and a trip to produce for onions and I was off...
Beer Brats with Caramelized Onions
1 pkg, fresh brats (I used 8 from a larger pkg.) 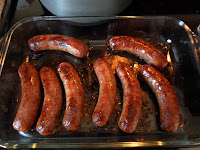 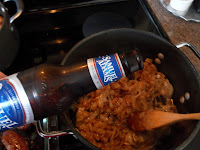 Place the brats in a baking dish and then in a 350 degree oven; cook, turning occasionally, until nicely browned, about 45 minutes.  Place the onion and butter in a fairly large pan with a lid; season with salt and pepper, cook the onions over medium heat until richly browned, stirring occasionally, about 25-30 minutes. 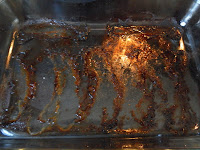 Pour in half the beer to deglaze the pan- make sure you scrape up all the good bits.  Nestle the cooked brats into the onions and pour fat from the baking dish (on to paper towels and into the trash is easy).  Using the remaining beer, deglaze the baking dish; pour this liquid into the pan with the brats and onions.  Cover the pan and simmer 10-15 minutes; uncover and raise the heat to medium- cook until most of the liquid is reduced.  Serve the brats in good sturdy buns smeared with grainy mustard and a generous amount of the onions. 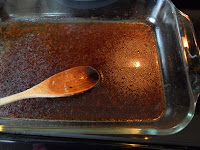 These onions were delicious; reminiscent of French onion soup.  Since Christopher would not eat them with his brats (ketchup...yuk!!), I had some left over.  I spread these on flat bread and topped it with some Swiss cheese before putting it in the oven to get all nice and toasty...supper yum ;-) 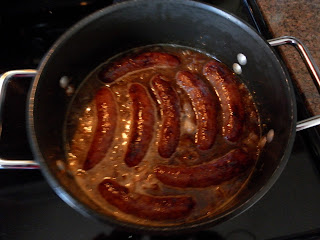