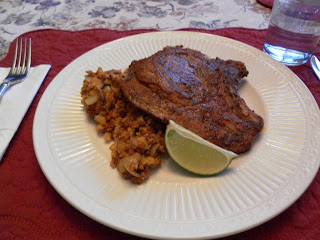 
We had had chili earlier in the week and there was still half a cast iron skillet of cornbread left (made with diced jalapeños :).  I had some fresh chorizo in the fridge (bu,t of course), so I knew I wanted to make a cornbread stuffing using the chorizo.  But what to have with?  I was paging through the January 2011 issue of Food and Wine magazine, and near the very end I happened across a recipe for grilled chile pork chops and I had my answer.
Now it's 10 degrees and snowy outside, so I was not going to venture outside to cook these, so i just seared them up nicely in the same skillet I used for the chorizo and aromatics.  The pork was juicy and ever so flavorful, while the stuffing was delicious with a bit of heat from the chorizo.  Ben commented that the stuffing would have been nice inside some nice fat chops, and that would have made a very nice way to serve them (although this was so much easier).
Chile Rubbed pork Chops
(adapted from Food and Wine, Jan 2011)
4 thin pork chops, loin or sirloin, bone-in or bone out, your choice 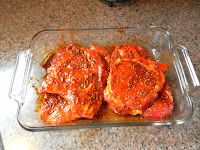 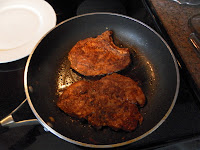 Place the chops into a glass dish.  Combine the remaining ingredients well and rub over the surfaces of the chops to cover completely.  Cover with plastic wrap and refrigerate for at least 3 hours.  A half hour before cooking set the chops on the counter to come to room temperature.  Heat a large saute pan or cast iron skillet over medium high heat.  Once the pan is hot, place in the chops, working in batches if necessary so as to not crowd the pan, and leave to cook undisturbed for 4 minutes.  Flip the chops and cook the other side for 4 minutes; remove from the heat and keep warm while cooking the remaining chops (if necessary).  Serve the chops with lime wedges. 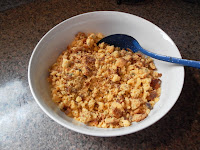 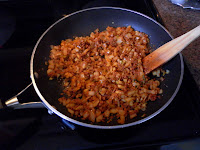 Cook the chorizo over medium heat until almost cooked through; if there is a lot of visible fat in the pan, spoon it off, otherwise, don't worry about it.  Add the diced onion and celery and continue cooking over medium heat until the vegetables are soft.  Add the chorizo mixture to the cornbread and toss to combine.  Pour one cup of chicken stock into a measuring cup and beat in the egg until completely combined; pour over the cornbread and toss to combine.  Add more stock as desired (some people like their stuffing "wetter" than others).  Turn into a baking dish and place uncovered in a 350 degree oven until the egg is set and the edges and top are browned and crispy, about 45 minutes.
at 8:15 AM