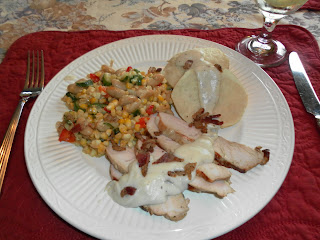 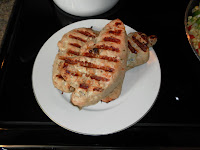 Thursday night was time for succotash!  Succotash is a dish made with corn and beans, usually lima beans, but really, any shell bean will work.  This is another beautiful, infinitely versatile and economical dish, in that as long as you have corn and beans, you have succotash...toss in whatever veggies you have around and you have a dish sure to please.  Succotash is not a "southern" dish per se, in that it is made all over the States, but it has that feel to me.   A dig through the freezer uncovered a package of turkey tenderloins, just as easy as chicken breasts marinated (canola oil, minced garlic, salt, pepper, and onion powder) and thrown on the grill, just bigger.  I felt the turkey needed some kind of sauce, and wanting to go with the southern vibe, I decided on Southern cream gravy (hey, it's a sauce!).  But what is cream gravy without buttermilk biscuits?  So we had biscuits too (I cheated here, because, alas, I do not possess the art of biscuit making, and it is, indeed, an art!). 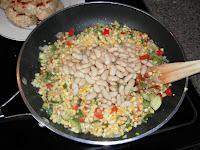 Corn...fresh off the cob is best if you have it, but I have made pretty good succotash using frozen corn
Beans...again, limas are usual, but use what you have and like (I used cannellinis)
Diced Veggies...onion, bell pepper, zucchini, tomato are all good
Salt and Pepper, to taste... (I'd tell you to use a nice coarse salt and fresh ground black pepper, but my grandma used iodized salt and pepper from a tin and it still tasted damn good)
BUTTER, not margarine...it browns while you cook and adds a taste that you just can't get with margarine  (I used 4 tbs. with this big amount I cooked).
Cream...optional, but adds a very nice richness if you have it around...alas, I did not :( 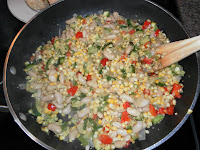 Saute your corn and veggies in butter over med-high heat until cooked to your liking (I like them starting to get little brown caramelized bits).  Toss in the beans (rinsed and drained, if using canned ones) and continue to cook until heated through.  If using the cream, add with the beans (not too much), and cook it off until it has disappeared into all the other goodness (you'll know).

In case you are not familiar, cream gravy is what you would get if you ordered country/chicken fried steak, and serves as the base for sausage gravy (of sausage gravy and biscuit fame).  This simple gravy can taste like paste if you don't treat it right, but if you take the care and time to get the roux just right, it is heaven on your plate.

Basically, you want to start with an equal amount of fat (bacon, sausage, or even butter) to flour and cook the roux over medium heat until it is a nice golden brown (if you don't, it will taste all "pastey").  Then you will want to slowly whisk in half your milk (no less than 2%),  Cook until VERY thick and then whisk in the rest of your milk...cook until it coats the back of a spoon very nicely.  Season with salt and pepper (be generous with the pepper) to taste (think about what I said with the succotash).  Serve over what ever in the heck suits you at the moment :) 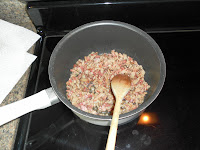 Here is what I used this time around...

1/2 lb. peppered bacon, diced
1/4 cup all-purpose flour
2 cups milk (I used 2%)
coarse salt and fresh ground black pepper (hey, they are on my counter next to the stove!) 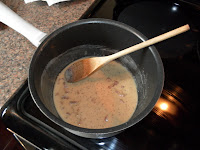 In a medium saucepan, cook the bacon over medium heat until brown and crispy.  Remove the bacon from the pan, leaving as much of the fat behind as you can (I held the spoon up against the side of the pan to drain it).  Add the flour and stir until smooth; continue to cook until nice golden brown, stirring occasionally (this will take a while, but this is the love).  Whisk in the remaining milk and cook until it thickly coats that spoon.  Season with salt and pepper (you gotta taste it for perfection) before serving it over whatever you wish... 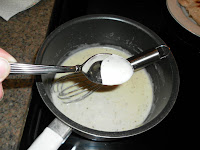 Now for that bacon...you can put it away for another use (on a salad would be good), or you can say "what the heck," and scatter it over whatever you have covered in the gravy (that's what I did darn it, and the succotash too!)
at 9:34 AM