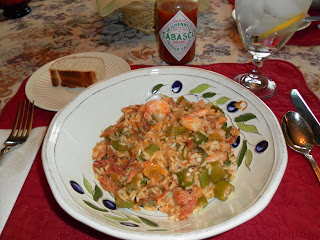 Cajun (Brown) Jambalaya with Ham and Shrimp
(And yes, I know that my place setting is mixed up.)
Finding all that 10 month old zucchini in the freezer last week sent me on search to see what else had been stashed for too long.  Uncovered...one meaty ham bone from Easter...not terribly old, but I felt I should use it anyway.  The first use that comes to mind with a ham bone is a bean or lentil soup of some sort, but it is really, REALLY hot and humid (75% yesterday), and who wants to eat a heavy, rib-sticking bean soup in this kind of weather? (Do rhetorical questions get a question mark?)

I considered the contents of the freezer (the one in the kitchen where things don't get "lost"), and a bag of shrimp made me think jambalaya (yes, I still seem stuck down south, I need to move there already).  I'm sure most are familiar with this rice dish of Louisiana fame, or at least of Zatarains fame (watch the commercial here)...

Jambalaya is an infinitely versatile dish (and one that can be made to fill the hungry tummies of many, if needed).  "Creole," or "Red," jambalaya is made with tomatoes, while "Cajun," or "Brown," jambalaya is made without.  I asked the boys which they preferred and they voted for the no tomato variety (I should have guessed that without asking), so Cajun it was.  This dish turned out every bit as rich and tasty as I had hoped, with the sweet shrimp contrasting beautifully against the overall "haminess" of the dish.  Chris thought it a bit spicy, so I would probably cut the cayenne by half in the future, especially considering that Ben and I added Tabasco anyway (Crystal Hot Sauce would have been a better choice).  I used okra here, but if you don't have it readily available, or don't like it, substitute a scant pound of whatever veg you do have.  Today I am just going to give you the jambalaya recipe, and the next post will cover the process to get here, as well as the shrimp stock I ended up making as well :) 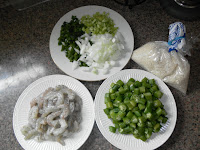 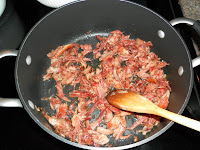 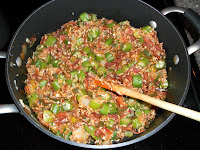 In a fairly large pot (mine is 5 qt.), saute the ham in the fat over medium heat until it is nice and brown.  Remove the ham and set aside, leaving as much of the fat in the pan as possibly.  Add the onion, bell pepper, and celery; sweat until tender but not brown, 10-15 minutes.  Add the seasonings and cook another minute until fragrant.  Add the ham, okra and rice, turning to coat the rice well.  Add the stock and bring to a boil; cover and reduce the heat.  Simmer for 20 minutes, or until the rice is tender.  Turn off the heat and stir in the shrimp; cover and let sit for 5-10 minutes- the residual heat will cook the shrimp without running the risk of overcooking them.  Serve with hot sauce (optional), crusty bread and a green salad.  We had a loaf of sweet Italian, and the slight sweetness of the bread was a fantastic counterpart to the spiciness of the dish.
at 9:07 AM