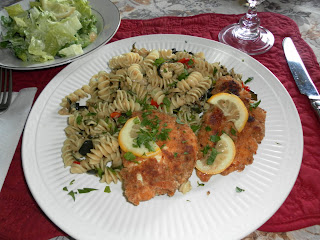 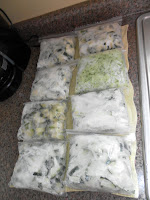 Last summer and fall I was gifted with a super abundance of zucchini (the darn rabbits kept eating mine), and I was putting that wonderfully versatile veg into everything.  Unfortunately, I used this veg so much that the family revolted and called a moratorium on its usage.  "No big deal," I thought, "I'll just put the rest up in the freezer."  Over the winter I was able to start using zuchs again, using the little baby ones from the grocery store and not a complaint was heard. 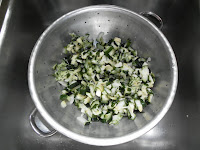 The downside to having that freezer in the basement is that I sometimes forget what I have down there.  I was rooting through it last week to see what I had and found the zucchini I had put away last fall.  Goodness, it was 10 months old!  Should I keep it or just toss it?  I decided to try using it... 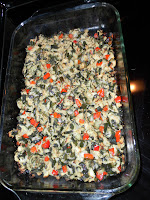 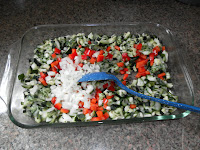 Knowing that frozen zucchini releases much of its water when thawed, I decided to take advantage of this.  I let it thaw on the counter and then dumped all 16 (!) cups into a colander.  After giving it all a squeeze, much like you would frozen spinach, I was left with about 7 cups which I tossed in a large baking dish with some finely diced red bell pepper, ivadalia onion, lots of garlic, salt, pepper, oregano, and about 1/2 cup of olive oil.  I roasted this at 450 until all tender and starting to brown- concentrated zucchini goodness.  Now, while I wouldn't recommend keeping your veggies frozen this long, it turned out tasty indeed.  (I would, however, recommend roasting up some of the FRESH zucchini abundance in this same manner, and abundance that you will surely have before summer ends.  This would be good tossed with pasta, served as a side, spooned onto crostini, or tucked a lasagna or other casserole.) 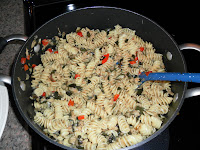 I put this away in the fridge and pulled it out later in the week for dinner.  Warmed up and tossed with cooked whole grain rotini and plenty of grated parmesan, it made a fine dinner.   With Ina Garten's chicken piccata, it gave me all the lemony, buttery, and garlicky goodness I had been wanting since I ate that braised artichoke.