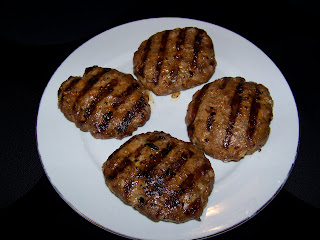 These don't even look like turkey burgers, do they?
The June issue of Food and Wine magazine is full of grilling recipes that I will be trying out this summer.  The first up was an Asian inspired chicken burger with a spicy peanut sauce...I had a pound of ground turkey on hand, and as I usually sub ground turkey for beef, it was a natural sub for chicken.  Ben is not usually a huge fan of turkey burgers, saying that they tend to be dry and tasteless, but this one was a hit and he wanted seconds!  The little guy raved as well and made me promise to make them again, and I most certainly will.  A natural with this was an Asain slaw inspired by one I saw not too long ago on Sandi's blog, A New York Foodie.  Give them both a try... 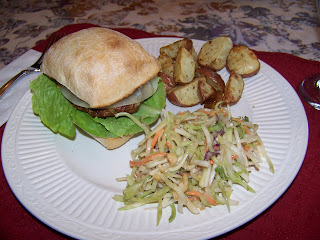 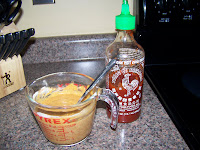 1/2 cup coconut milk
4 tbs. crunchy peanut butter
1 tsp. chili powder
1/2 tsp. cumin
1/2 tsp. paprika
1/4 tsp. cinnamon
1/4 tsp. cayenne
1/8 tsp. ground cloves
optional- stir in a tbs. or so of Siracha after serving the children
For serving:
4 toasted/grilled ciabatta rolls
provolone cheese (optional, my guys like cheese on their burgs)
leafy lettuce leaves
Mix the sauce ingredients and set aside for the flavors to marry.  Mix the burger ingredients and form into 4 equal 4" patties; when making turkey burgers I find it helpful to put the patties into the freezer for 30-45 minutes to firm them up before putting on the grill.  Grill until done but be careful not to overcook (sorry for not giving times, because I really don't know how long it took other than, not too long).  During the last few minutes of grilling, toss the split ciabatta rolls on to get them nice and toasty.  Slather the rolls with some of the sauce, add the lettuce and the burgers, topped with cheese if desired.  We used the extra sauce to dip the home fries in and refrigerated the leftovers.
Asian Slaw
adapted from A New York Foodie
4 tbs. seasoned rice vinegar
3 tbs. canola oil
2 tbs. creamy peanut butter
1/2 tsp. dark sesame oil
1 lb. pkg. shredded slaw mix (I used broccoli slaw)
4 scallions, thinly sliced
1/4 cup chopped peanuts
In a medium serving bowl, stir the first 4 ingredients until well combined.  Toss in the slaw mix until well coated.  Just before serving, toss the slaw mix again, add the scallions and peanuts, toss one last time and serve.
This would be another picnic friendly salad, and the little guy declared it "kid friendly" as well (although I did wish he would eat it with a fork instead of his fingers!).