Now this IS a tasty burger... 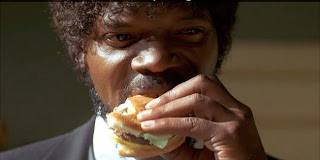 "Now this IS a tasty burger!"
photo courtesy of
http://www.x929.ca/shows/newsboy/wp-content/uploads/bigkahuna-burger.jpg
One of our all time favorite movies is Pulp Fiction, and after a bite of last night's burger, Ben said that I had to start this post with a photo of Jules in the Big Kahuna Burger scene.  If I ever have the opportunity to try a Big Kahuna Burger, I will only do so because it has been mentioned in so many of Tarantino's films, as it really doesn't look that appealing to me.
Last night's burger, however, was a different story.  The Italian Sausage Burger with Garlicky Spinach is the second burger we have had now from the June edition of Food and Wine magazine, as well as the second "keeper."  Chris was a little put off initially by the sight of sauteed spinach in his burger, but declared it delicious once he had a taste.  Between the garlicky spinach and the garlic in the Sundried Tomato Pesto spread on the roll, this is a burger for garlic lovers. 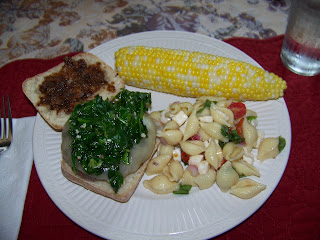 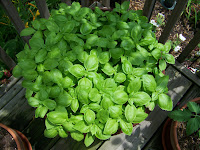 Corn cooked on the grill in its husk is a given in our house to go with just about any summertime burger, but the meal still needed something more.  The big pot of basil growing on my deck needed to be thinned out, and this was the inspiration for the rest of the meal.  I don't have any delectable summer tomatoes yet, but did have some grape tomatoes in the fridge, so I thought I would use the small basil leaves with the small tomatoes and make a Caprese Pasta Salad.   The fairly simple tastes of the salad were the perfect foil for the strong tastes in the burger.
Italian Sausage Burger with Garlicky Spinach

adapted from Food and Wine, June 2010
1lb. bulk Italian sausage, hot or mild
10 oz. baby spinach, roughy chopped
1 tbs. estra virgin olive oil
2 cloves garlic, minced (2 tsp.)
4 ciabatta rolls, split
4 slices provolone cheese
1/4 cup sundried tomato pesto, homemade or purchased
In a large nonstick saute pan, saute the spinach and garlic in the olive oil until wilted; cover to keep warm and set aside.  Form the sausage into 4 equal patties and grill on a hot grill until cooked through, topping with the cheese just before finished.  Toast the rolls, cut side down, on the grill for the last few minutes of cooking time.  To assemble the burgers, spread a thin layer of the sundried tomato pesto on the top and bottom of each roll, then place a cheese topped burger and top with an equal portion of the sauteed spinach.  Put on the top of the roll, eat, enjoy...
Caprese Pasta Salad 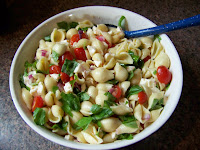 12 oz. pasta shape of choice
1 cup Italian style dressing, hommade or purchased
1/2 of a red onion, diced small
1 pint grape tomatoes, halves
8 oz. fresh mozzarella, diced small
1 cup, loose packed, fresh basil leaves, torn if large
I like to use medium shells for pasta salads because they catch the diced bits inside, but use whatever shape you like or have around.  Cook the pasta until al dente, rinse in cool water and drain well, and put into your serving bowl.  While the pasta is still warm. toss with the Italian dressing, diced tomatoes, and halved tomatoes.  Place in the fridge until about 1/2 hour before serving, then bring it out and allow to come to room temperature.  Just before serving, toss in the mozzarella and basil leaves.
at 1:35 PM