I'm back from camp and cooking again... 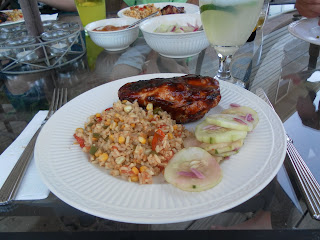 We are all home and relaxing, me and my three guys from an exhausting week at scout camp, and Nicole, from her adventures inPrague.  Except for a crockpot meal on Monday night, not much cooking has been happening,and Nicole was lamenting the lack of leftovers in what is normally a full fridge.   Split breasts on sale at Kroger for one dollar a pound meant BBQ chicken for dinner, and the contents of a veggie drawer that needed to be used lead me to an accompanying rice dish and cucumber salad.  Dinner on the deck with fresh limeade all around (with a bit of tequila for the grownups :) made for a great night at home on the deck. 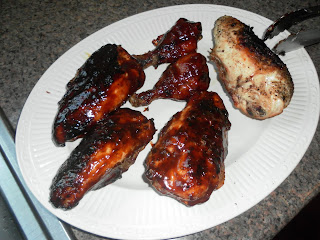 Ben is a proud grill master and snapped this photo of "his" chicken after he pulled it off the grill.  The unsauced breast to the right is intended for this evening's dinner- this huge breast is nearly a pound on its own, and when we go back to Kroger today for Father's Day steaks, I'll be picking up more of these for the freezer.
Southwestern Rice 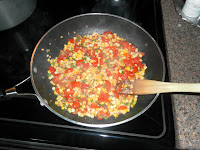 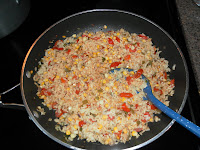 When you cut the kernels off the cob, cut them very close to the cob to keep the kernels as intact as possible.  Saute the veg in the butter over medium high heat until softened and the tomatoes have released their juices.  Add the cumin, salt, and pepper, saute a minute more or until the cumin is fragrant.  Toss in the rice and just heat through.  I had intended to serve this with chopped fresh cilantro, but alas, it did not survive the week. This rice was so tasty that I'll be sure to get another opportunity this summer. 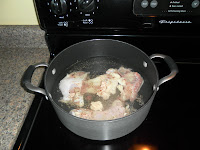 Not only were these split breasts huge and meaty, but the ribs I trimmed off were meaty too.  The pile of trimmings on my cutting board couldn't go to waste, so I tossed them in a pot of water with whole garlic cloves (5), bay leaves (2), salt and pepper and let simmer through dinner.  I covered the pot and stashed it in the fridge; this afternoon I'll skim the fat and shred the meat from the ribs back into the stock.  Don't know what I'llo do with it just yet, but hey, that's what freezers are for.
at 12:33 PM