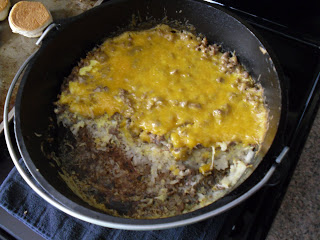 Mountainman Breakfast
In anticipation of a summer full of camping adventures, Ben and I decided to expand our outdoor cooking skills and bought a dutch oven, a real one that goes on the fire or uses hot coals, not a covered metal oven casserole.  We started with the basic Mountainman breakfast from the Lodge Camp Dutch Oven Cooking 101 book, and from this simple dish learned that we have much learning to do.  Adjusting the heat with the coals is going to take practice, as is the best ways to deal with our ingredients (something we don't give too much consideration too, even if cooking on the camp stove).  From our first attempt we learned to not use frozen potatoes, they cool the pan off too drastically and don't allow the potatoes to brown.  The potatoes were more like mashed potatoes than hash browns; Nicole's comment was that it would have been good with some sort of sauce (again, like mashed!).  We will also try halving huge recipes in the future (we ate from this for days); I don't think we will have burnt food if we do (our fear).  Well, here's what we worked with...I'll give updates as we tweak this...
Mountainman Breakfast
2 lbs. ground sausage (we used 1 pork and 1 turkey)
2 lbs. shredded potatoes
8 large eggs, beaten with 1/4 cup of water (we used milk)
2 cups shredded sharp cheddar
salt and pepper to taste
Tabasco sauce for serving
In a 12" camp dutch oven over a full bed of coals, crumble and brown the sausage.  Remove the cooked sausage with a slotted spoon to a paper towel lined plate.  Brown the potatoes in the remaining drippings; spread evenly over the bottom of the pan.  Sprinkle the sausage over the potatoes and pour the eggs over the sausage layer.  Sprinkle on the cheese and cover.  Cook with 8 coals underneath and 16 on top for 20 to 25 minutes, until the eggs are cooked.

Notes:  Perhaps is was because of the turkey sausage, but we found that we had very few drippings in the pan and had to add a bit of canola oil to cook the potatoes (which never did get brown).  on the next attempt we will halve the sausage and potatoes, but only reduce the eggs to 6.;  We are also going to toss the potatoes and sausage together. rather than layer them, this should allow the eggs to better penetrate the whole dish.  And again, we will not use frozen potatoes.  The salt and pepper were our additions that were surprisingly not listed in the recipe.
at 11:40 AM