And the first up is...Lima-Limon


I was poking around on the internet looking for inspiration for the eleven bottles of Jarritos awaiting me in my pantry.  Cooking with soda seems to involve a lot of onion soup mixes, canned cream soups, ketchup, or jello, none of which sounds appealing to me (quite yucky, in fact), so the thinking cap has gone on and sent me pondering my options.  I have a few ideas, some obvious, some not so, but we'll have to see how it goes. 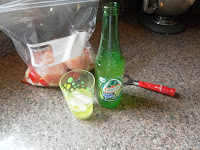 First out of the box is the Lima-Limon, or Lemon Lime.  I have an agreement with Chris that he will get to taste test each soda before I do anything with it, so I called him to the kitchen and we popped the top.  I must say that the soda was not what I expected at all, the color and taste more reminiscent of Mtn. Dew than the 7-Up that I was expecting.  I am not a fan of Mtn. Dew, but Chris found the taste very acceptable and said he could drink the whole bottle.  If the caffeine content is more reasonable than the dew's, I just may let him in the future...except for Piña, this is the only other one he has tried and he is already bugging me to go to the grocery and buy them all (that's what I get for limiting soda consumption I suppose).


I thought that the lemon lime flavor would lend itself nicely to chicken, and after viewing an episode of Diners, Drive-ins, and Dives the night before where Guy visited that Koren-Mexican fusion taco truck in LA, I wanted tacos.  Fortunately the contents of my fridge and pantry allowed me to go in that direction (any real surprise there?)... 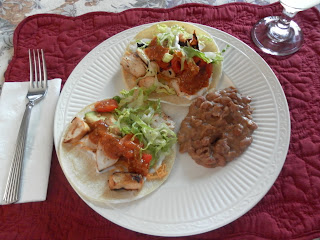 taacos de pollo lima limon con frijoles
I had the chicken and veg marinating, and did not discover until I went to cook them that the gas frill was out of gas. so I didn't get to cook them as planned.  The next evening rolled around, and with family in from out of town, I still did not get to cook this chicken.  This leaves me tonight, with this chicken in the marinade more than two whole days, and afraid of what I was going to get.

What I got was absolute delishiousness....the chicken had a distinct lemon lime flavor, but still subtle, even after two days.  I grilled up the chicken and veg before slicing up the chicken and tossing it with the veg.  This was served on warm corn tortillas with shredded cheese, avocado slices, crema, salsa roja, and shredded lettuce.  On the side we had the frijoles I had made two nights previously (and reheated gently in the microwave).  These tacos were delectable and got me thinking that this marinade would be fabulous for fish tacos (but not marinaded for 2 days!)... 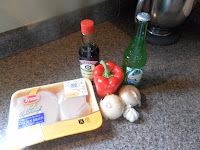 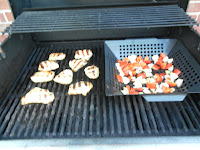 Trim the chicken of all visible fat and cut each breast into thirds (to enhance the marinating process) and drop into a gallon size zip lock bag.  Cut the bell pepper and onion into a large dice and drop into the bag with the remaining ingredients.  Zip the bag and mush around everything to combine before stashing in the fridge until ready to grill (a few hours at least).  Grill the chicken and veg (use a grill basket for easy veg), and slice up the chicken after allowing to rest a few minutes.  Serve with warm corn or flour tortillas and whatever taco accompaniments you desire.  The only thing I would change is to use more veggies, as they grilled up so nicely, charred in bits but still crisp (yum).
at 9:36 PM