Starting now for the Super Bowl... 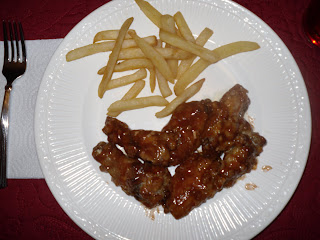 
The title of this post is pretty ridiculous considering that neither Ben nor I care for football and don't even know what teams will be playing. That said, we will be enjoying the company of good friends on this day, which, if everyone is honest, is the best part of the day anyway. Whether your team wins or loses, it's all better in the end because you watched it happen with friends. I was paging through my most recent copy of Food and Wine (Feb 2010) when I happened across a short article about perfecting hot wings. Ben and I enjoy the occasional wings like everyone else, but I have never had much success making them at home because I will not deep fry anything (it's messy, smelly, and I would rather save fried foods for eating out). This article made me want to have another go at it andI declared that if they were a success that we would be taking them with on Super Bowl Sunday.
I picked up a 4lb. bag of wings ($7.99 @ Aldi, prepped, no tips) and set out this past Monday to make wings. The magazine covered the traditional and seven variations; we did the Traditional, the Maple Chipotle, and plain barbecue for the boy. I started tossing the wings with the sauce, just using my fingers to toss them around when Ben stopped me, informing me that I was doing it all wrong. I needed to toss the wings in a large stainless steel bowl, using the bowl to toss them in the air without ever touching them. I don't have stainless bowls so he took my ceramic bowl from me and started imitating what he had seen on TV- fine until one of Christopher's wings ended up in the sink. I guess I'll have to invest in some bowls :) These wings were easy, crispy, and delicious- a definite keeper and will be made again for the big day. While Christopher's wings were just tossed with a bottled BBQ sauce, he raved about how good they were. Ben and I really like the Maple Chipotle, but next time around will add another pepper to the mix. Since we were going all out with the wings, Ben also wanted Garbage Fries, something I haven't made in a few years. I figured "why not," this certainly was not a diet friendly undertaking (although baking is a lot better than frying :) 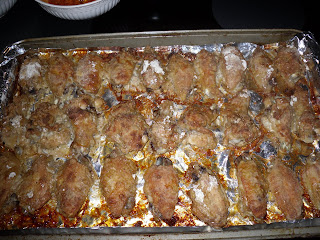 Preheat the oven to 5 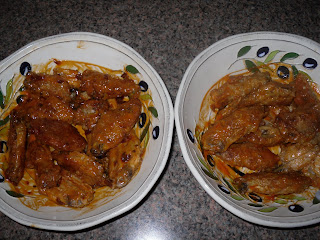 00 degrees. Line a large rimmed baking sheet with foil and spray with cooking spray. Mix the flour and seasonings in a bowl, then toss the wing pieces to coat. Lay on the baking sheet in a single layer and give a liberal spray of the cooking spray. Roast the chicken for 45 minutes, until browned and crispy. In a large bowl toss the wings with the hot sauce and butter just before serving.
Maple Chipotle Wings: to the hot sauce add 2 tbs. maple syrup and 1 or 2 canned chipotles, minced. 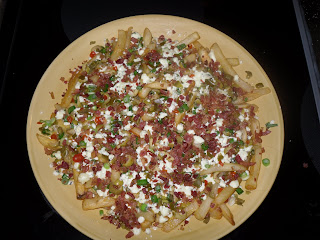 Prepare the fries according to pkg. directions, whether you fry or bake is up to you, but make sure they are nice and crispy. Cut up the jalapenos, olives, and scallions; how much is entirely up to you. Reserve some fries for those who don't like all the "garbage," spreading the rest on an oven-proof platter. Sprinkle the fries with the chopped veg. cheese, and bacon, put back into the oven to warm through and melt the cheese. Serve with Tabasco sauce. 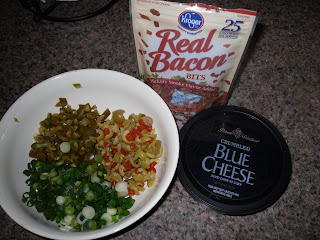 You'll notice in the picture that I used Kroger brand stuff, unlike the Food Network, I don't have to blank out the labels of my very obvious products :)
at 1:28 PM