A Good Day for Soup 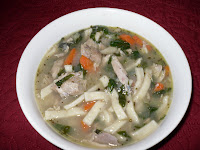 My computer died a couple days ago- no blue screen of death or any other kind of warning, it just woke up dead (I'm trying to keep a sense of humor about it). The good thing about it is that I finally am going to get the new computer that we have been talking about for six months, a Dell laptop with a nice big 17" screen,all the better for my prematurely old eyes to see. I can't get to any of my photos (or files) until Ben can recover my hard drive, because silly me erases them from the camera as soon as I download them- lots of pretty food pics, but I can't get to them. Oh well, until my new computer gets here (not shipping until the 21st!!), I will be using the Christopher's computer (and he doesn't like sharing, grumpy boy).
Today is really cold and tomorrow is supposed to be even colder, with lots of snow to come, ugh! My mother-in-law told me years ago that as I got older I would hate the cold more and more (I had made the mistake of complaining about the summer heat in south Florida where they have a house), and I be damned if she wasn't right. Now just counting down the time until Ben retires (only 11 more years!!) and we can migrate south as well. We have also started looking at condo ads for Hilton Head, thinking that once Nicole finishes college we can divert the money from her school and living expenses to a 2nd home for us (never hurts to dream, does it?).
The only good thing about the cold is the desire it brings out in us for homemade soup. A rummage through the freezer uncovered both a chicken carcass and a meaty ham bone- soup nirvana :) I dropped the chicken in a soup pot with some bay leaves and water, leaving it to cook while I was on the eliptical (yes, me!). Once the broth was golden and shimmery (yeah for chicken fat) and the meat falling off the bone, the carcass came out to cool and the broth was strained into smaller pot. The broth goes in the fridge to chill, allowing me to easily skim off some of that fatty goodness (all in moderation). Into the soup pot goes the ham bone and the process starts all over again. Once everything is cool, the broths are skimmed, the meat picked from the bones and added back in, and I am ready for soup making. The meaty chicken broth I used to make chicken noodle soup loaded with veggies to go with reubens made with leftover New Year's corned beef. I really want to make a split pea soup with the hammy goodness, but with Nicole away at school, I am the only one in the house who will eat it, so I put the broth and meaty bits into the fridge for another day. 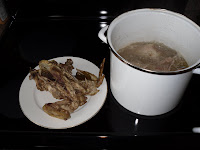 The chicken carcass is out to cool with the broth strained and cooling in the fridge. In goes the ham bone to cook next. 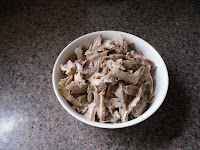 The meat from the chicken carcass. 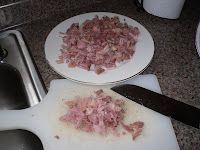 The meat from the ham bone with a rough chop. 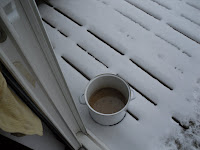 I did not have enough room for both pots in the fridge so the ham broth was put out on the deck to cool...at 20 degrees, I think it was pretty safe from buggies :)
at 10:15 AM