What a frustrating couple of weeks. The whole computer thing has put me really behind on all my record keeping for my various cub positions, and I have had to start keeping the finances on paper (gasp!). I got my new computer a few days ago and have my photos and music back, but have come to discover that all the rest of my files were encrypted :( A friend of Ben's does forensic computer file recovery and is going to give an assist, but it will probably be a few more days before I am completely restored (note to self- backup more often, once a year is NOT enough). At least I can start blogging again :) The last entry, working on Christopher's computer and uploading directly from my camera, took so long and was just no fun, and the whole point of this endeavor was to have fun with it, so I gave it a rest. Today I hooked my new camera up to my new computer and finally downloaded all the great pictures I have been taking.

I really don't know where to start, so I'll just sort of pick up where I left off, with soup. The chicken noodle soup was a hit, with even the little guy raving about how good it was, and if I can get a 10 year old that happy about eating spinach, zucchini, and carrots, I have do 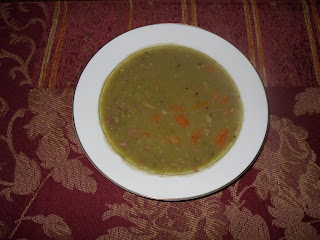 ne a good thing. There was enough left over that I was able to pack it for Ben's lunch for a few days. That hammy goodness that I set aside did end up in a split pea soup. I kept thinking about how good it would taste and decided that it was unfair to deprive myself just because Ben doesn't like it, and besides, that left more I could package for the freezer to send to my grandfather :) I don't know if it was because I wanted it so badly, or if the soup gods were on my side, but it was some of the best damn soup I have ever made. I think it's great flavor came from the rich ham broth and all those ham bits. I had a several great lunches from this :)

For as long as Ben and I have been together, we have made French Onion Soup together for the New Year, usually on the eve. When we started this so long ago it seemed like a really big deal (neither of us cooked much then), and it became a treasured tradition. Ben had to work this past New Year's eve, and I was planning on a corned beef dinner for New Year's day (this too has become a tradition), so we didn't end up having it until the fallowing weekend. This soup is so good and soul satisfying, but also incredibly easy to make, you just need to allow enough time to do it right. Don't substitute margarine for the butter; the butter itself browns during the cooking and adds another dimension that you just don't get with margarine. This soup can be done in a bread bowl as we did, or more easily, just toast a nice thick slice of good bread and float that in the soup. Try this soup and see if it doesn't become a tradition (or at least a staple) for you as well. 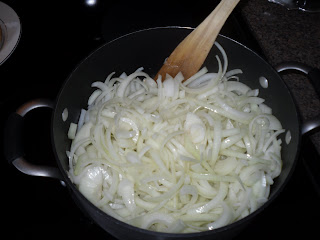 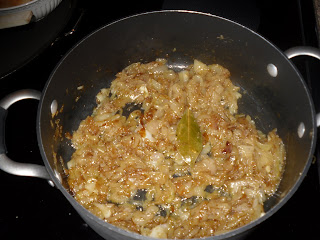 m heat in a pan large enough to comfortably hold 2 quarts. Add the butter, bay leaves, and a generous amount of salt and pepper. Saute until caramel colored, 45 minutes to an hour- don't rush this by turning the heat up higher. This may seem like alot of onions, but they reduce a great deal as they release their liquid and caramelize. Once the onions are brown, add the beef broth, about 6 cups if serving in bowls with a slice of bread, or up to 8 cups if serving in a bread bowl. Bring to a boil, reduce the heat and simmer, covered, for at least an hour.
While the soup 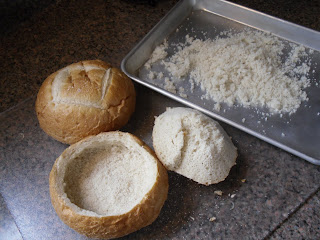 is simmering, prepare the bread rounds if using. Cut a circle out of the top of each loaf, then use your fingers to hollow out each loaf to about 1/2 inch thickness, being careful not to tear the loaves. When we do this, we use the circles we cut from the top for the kids soup bowls since a bread bowl is too much for them. I also reserve the bread I pull from the middle to make bread crumbs 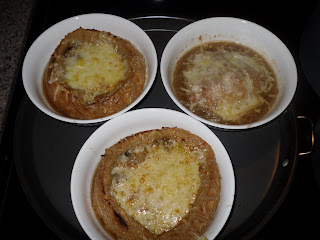 for other uses. I will usually prepare these bowls early in the day and let them sit on the counter; they dry out a bit, allowing them to soak up more of the broth.
When you are ready to serve, preheat the broiler. Add a good pour of sherry to the soup (if using) and ladle the soup into the bread bowls, or regular bowls and float the toasted bread slices. Cover each with a good handful of cheese and place under the broiler until golden and bubbly. This recipe will make 4 very generous sized portions.
at 8:21 PM