Ben and I were shopping again at Jungle Jim's (International Market) when we found a package of Taylor Pork Roll.  I had never heard of this product before, but Ben was reminded of a Michael Symon recipe he had read online and quickly pulled out his PDA to look it up (good use for a smart phone if you ask me :-).  The recipe is for a sandwich/burger called the Lipitor Special and was touted as a "Hangover Helper".  I'm always up for trying new things, even those ungodly bad for us things that Ben finds, so we bought the roll.

We both love Michael Symon, so much that we are planning to road trip to Cleveland sometime JUST to dine at one of his restaurants, so I followed the recipe exactly as given (despite the use of  Miracle Whip and American cheese).   The "burgers" were pretty good,but a bit on the sweet side and terribly difficult to eat...I ended up pulling out my slice of pork roll and feeding it to the dog, not that she minded.  We decided on some changes that might encourage to make this again...a smaller roll, or perhaps an English muffin...a 1/2 rather than 1 inch thick slice of pork roll...reduce the bacon to 2 slices...extra sharp cheddar instead of the American...and finally, mayo instead of the Miracle Whip.  I'll be sure to let you know if we make this again. 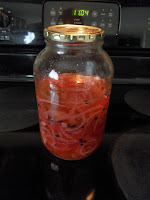 One very good thing that came from this was the pickled onions.  I used Symon's recipe from his cookbook, Live to Cook, and they were fabulous.  We will be topping many things with these, especially considering how easy they were to make.

Place the onion slices in a clean jar and add enough water to just barely cover; por out the water into a large measuring cup and replace 1/2 of it with vinegar.  Pour the liquid into a non-reactive saucepan and add the remaining seasonings, using 2 tbs. of sugar and salt for 3 cups of liquid; bring to a boil and cook for 2 minutes.  Pour the liquid over the onions (they will wilt some), screw on the cap and refrigerate (I did let mine cool first) for up to one month (they won't last that long). 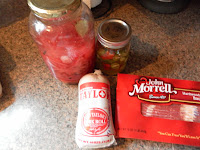 Cook bacon till crisp in a medium sauté pan over medium heat.  Set the bacon aside but reserve fat in pan to fry the pork roll for 1 minute per side (I did spoon off a lot of bacon fat before proceeding).  After flipping pork roll, top it with cheese to melt. Remove pork roll and set aside.  Cook egg over easy (I cooked Ben's this way, but cooked mine till the yolk was set).  Drain excess fat from pan and toast bun in the pan—it’ll still soak up that good bacon grease.   Place Miracle Whip on bun, top with pork roll, bacon, egg, jalapeños, and pickled onions, and eat immediately.  Ben dipped his O rings in the runny yolk like it was ketchup and declared it delicious.