My, my, my, it seems that it never ends. Today was supposed to be my day to write, but cub scout business has kept me busy for the day (again), and here it is, almost three in the afternoon. I really can't complain though, I am making a contribution to a very worthwhile organization and there is certainly nothing wrong with that. Before I get back to the Thanksgiving coverage, I want to take a moment and share with you something my friend Sandy and I did Sunday afternoon. These are pilgrim hat cookies that we put together, 95 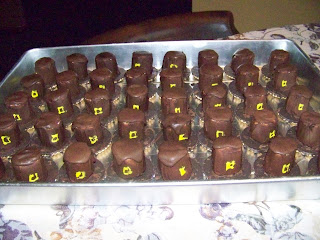 of them, using fudge stripe cookies, marshmallows, and melted chocolate. We gave these out at our November cub scout pack meeting on Monday night. I think they turned out pretty cute and were a definite hit with the boys and their sibs. I am still, however, trying to figure out how I ended up with chocolate from my wrists to elbows!

Ben and I never did have a piece of that pumpkin pie on Thanksgiving (we were too stuffed from all the other yummy food), but when we finally did try it, we agreed with the other reports that it was the best pie yet. I did manage a taste of the trifle on the day and it was really good as well. This was the firs time I had made a trifle and it could not have been any easier- and the presentation in the glass bowl was pretty wow as well (thanks Kristy for the loan of the bowl :).

Preheat the oven to 375 degrees. Whisk together the dry ingredients. Add the pumpkin, eggs and cream, stir to c 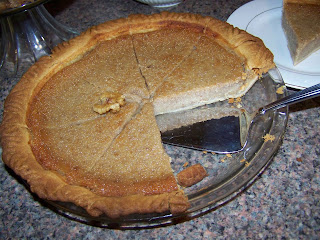 ombine well. Pour into the unbaked pie crust and bake until the center is set, about 60 to 65 minutes. Cover the edges of the crust with foil if they start to get too brown during baking. Remove from oven and let cool at least two hours before serving. Serve with fresh whipped cream. (The walnut in the middle of the pie was used to hide my knife mark from testing the pie- a trick to remember)

Pour the ingredients into your stand mixer, turn on to high and walk away to do something else (gotta love being able to do that :), or beat with a hand mixer until the cream is stiff, a couple of minutes. I don't understand Cool Whip when this is so easy, and so much tastier.

Whip the cream, sugar and vanilla until stiff; with a spatula, very gently fold in a little more than 1/2 of the jar of pumpkin butter. refrigerate until needed. Cut the quick bread into 1 inch cubes- I used a loaf of zucchini bread that I had baked this summer and stowed in the freezer (featured in a Facebook posting). In a small saucepan, heat the brandy and maple syrup to a simmer, stirring to combine well. Drizzle the brandy syrup mixture over the cubed quick bread, tossing to allow equal absorption. I prepared the cream and bread the night before and assembled on Thanksgiving morning- do it however beat fits your schedule. Layer 1/2 of the cub 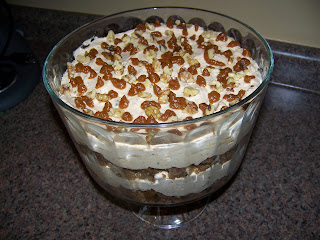 es in the bottom of a trifle or other clear glass bowl, spreading for an even layer. Sprinkle over 1/2 of the walnuts, then spread evenly wit 1/2 of the pumpkin butter cream. Repeat. Spoon the remains of the jar of pumpkin butter into a ziplock baggie; cut a small corner off the bag and dot the surface of the cream with the butter, or pipe it on in a pretty fashion if your hand is steadier than mine. Dot with additional walnut pieces and refrigerate until serving time.

Well, my little guy will be stepping off the bus any moment, 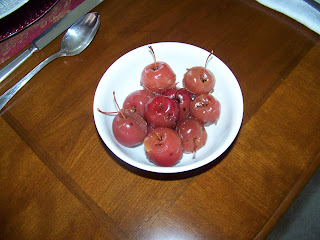 so I think I am going to bring this to a close. Considering that Thanksgiving was almost a week ago now, I think I will put it to bed now. BUT, if there are any items on the menu that you want a recipe for, just let me know and I'll get those up. I'm going to end this with a picture of Christopher's pickled crabapples- they were certainly tart, I think a touch more sugar next time, but I am looking forward to trying a vinaigrette with the spicy vinegar from the jars.
at 9:15 AM