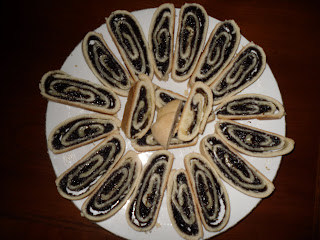 I hope everyone had a wonderful Christmas spent with loved ones (and lots of good things to eat :). We had a fabulous time at my in-laws, and the only thing I cooked the entire time was a wine reduction sauce to accompany the beef tenderloin for Christmas dinner. I got a new camera I wanted for taking my food and flower pics- no more using Ben's clunky camera. Looking at the other gifts I received one would think I liked to cook or something (lol)- three cookbooks, a beautiful set of forged steel knives to replace my old stamped ones, a set of pretty serving bowls, and an antique silver tea service. A nice haul for a foodie :)
For breakfast the morning after we arrived home, we had scrambled eggs and sausage with Ben's last kolacky. When my mother-in-law read my blog at Christmas, she informed me that I had used the Americanized (and thus, incorrect, spelling), so I have used the correct spelling here :) I am including a picture of Ben's so you can see how pretty it was- not too shabby for someone who claims he can't (won't) cook.

Wanting a cocktail one night before leaving for the holiday, I turned to the habanero scotch I had steeping in the basement. I had found some mango syrup at Kroger, and figuring that a month was adequate time for the infusion process, I set out to make myself the long awaited cocktail (see the November 17 posting). I poured some of the scotch into my shaker with a splash of the syrup, gave it a good shake, and poured it over some ice. It looked good, it smelled good, so I took a little taste- and promptly found my mouth on set ablaze! Either one month was too long, or six habaneros were too many (or both), but this was liquid fire. I added some water to the glass which made the heat palatable, but left me with a watery tasting drink. Into the sink it went.
Home after C 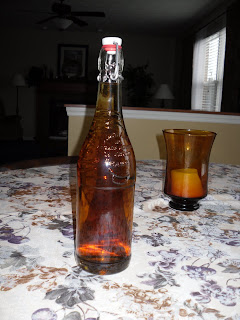 hristmas, I picked up a bottle of inexpensive scotch to see if this cocktail dream could be revived (I sure wasn't going to try with the Glenfiddich in the liquor cabinet!). Trying again with one shot of the newly purchased scotch, 1/2 shot of the liquid fire, and a splash of the mango syrup. This time all was good, I had the spicy and slightly sweet cocktail that I have craved for a year. Pouring the infused scotch into a pretty bottle, Ben joked that I should put a label saying "Danger" on it- I'll have to see about that one.
at 3:06 PM