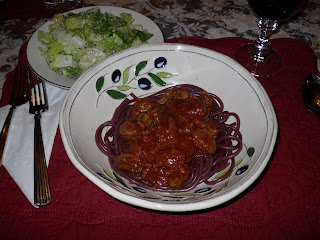 Ben and I were watching an old holiday episode of Iron Chef a few weeks ago where Mario Batali was paired with Rachael Ray against Bobby Flay paired with Giada DeLauerentis. I'm no fan of Rachel Ray, and Ben makes fun of the size of Giada's head and thinks she has too many teeth, but I love Mario Batali and Bobby Flay is okay too. Mario won Battle Cranberry despite the burden of Rachael's flustering. One dish in particular they made stood out for Ben and I- pasta cooked in red wine with an Italian sausage ragu. I told Ben I wanted to try that and he remarked that I better be planning on using winky owl, referring to Winking Owl wine, an ultra cheap brand from Aldi (the Shiraz doesn't taste too bad for a cheap quaff).

I was at Kroger yesterday and found a package of perciatelli, a hollow spaghetti- like pasta very similar to that used by Mario and Rachael, so I knew what we were having for dinner the next day. I had both the hot and mild Italian sausage links at home in the freezer, but I did pick up a $3.99 bottle of Merlot.
The next afternoon I made the ragu and let it simmer until dinnertime. Just before it was time to eat I poured the bottle of wine int 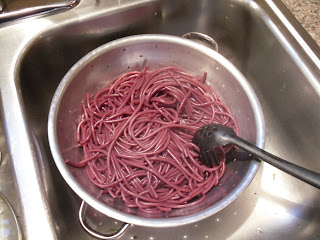 o a pot to cook the pasta and found that one bottle was not going to be enough (Ben was saying "I told you so" in the background), but I fortunately had a bottle of the winky owl in the pantry, so into the pot it went as well. The pasta smelled fabulous while it was cooking, and before draining it, I ladled some of the wine into the ragu to thin it, so between what the pasta absorbed during cooking, and what I added to the sauce, very little of the wine was wasted (good thing, because even at $4 a bottle, this is a pricey pasta to make).
With much anticipation we sat to eat. The ragu was good, but not spectacular- the real star was the pasta. It took on a beautiful purple color from the wine and the taste WAS spectacular. We decided that the leftover pasta would be finished later in the week just dressed in butter. The ragu is destined to have peppers and onions added to become calzone filling. You have to try this sometime as a special treat, if you love pasta, and you love wine, you will love this dish!

Before I got this published, I was telling my mother-in-law about this pasta and she wondered about doing it with white wine as well. It wouldn't have the beautiful color, but is one I am definitely going to try in the future as well.

Cook the pasta in the wine without salting. Before draining, ladle some of the wine into whatever sauce you are making (if applicable). Drain, but do not rinse. Serve and enjoy :)
at 5:17 PM