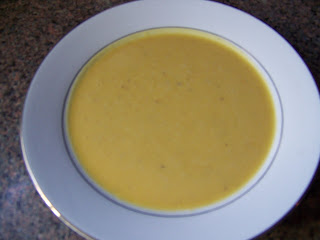 I still had two small pumpkins left, and with Thanksgiving long past, I needed to find something to do with them. I had visions of glistening pumpkin cubes, roasted to a crisp brownness, sweet on the inside, savory on the outside.
With this vision in mind I set out peeling the pumpkins (with a vegetable peeler no less, so as to not waste any of that pumpkin deliciousness), saving the seeds to roast and salt for later snacking. This done, I diced the pumpkin into about 3/4" cubes and tossed then with olive oil. I spread the cubes onto a baking sheet and seasoned liberally with kosher salt, fresh ground black pepper, and garlic powder, still imagining the sweet and savory play of flavors (was I salivating?). I put the seasoned cubes into a 450 degree oven and waited. The smell was grand, and after about 10 minutes I pulled then out to toss around on the pan - so far, so good. Another 10 minutes in the oven and I pulled the cubes out to toss again and was greeted with pumpkin mush!! The cubes, while browning as desired, are not crisp, instead, soft and mushy. I sample a cube, and while indeed quite tasty, the texture and lack of crispness lose it for me and I just set the pan aside.
Darling husband enters the room and asks what is on the 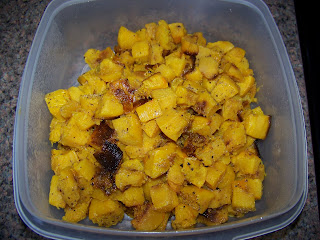 pan. When I tell him of my vision he says I needed to deep fry the cubes. As we don't deep fry in this house, I figure that I am stuck with ordering sweet potato fries (as the closest facsimile) when I can. But, not being one to waste perfectly good food (the cubes did taste good after all), I scooped them into a container and put them in the refrigerator.

The next day I am playing around in the kitchen when it occurs to me to make soup from the mushy pumpkin cubes, soup being a wonderful use for all sorts of kitchen leftovers. I diced up a large onion and sauteed it until it started to caramelize before dumping in some minced garlic and the cubes. I give it all a quick toss and a liberal seasoning with some more black pepper. Some chicken stock, milk, and a whiz with the immersion blender and I had a very nice soup and my kitchen failure was redeemed :)

Peel and cube the pumpkin, toss with olive oil and season with salt, pepper, and garlic powder. Spread on a baking sheet and roast at 450 degrees until browned and softened, tossing a few times during roasting. Dice a large onion and saute with a little olive oil in a soup pan until starting to turn brown. Toss in the minced garlic and pumpkin cubes, stirring together until the garlic becomes fragrant. Pour in the chicken stock and simmer a few minutes to meld the flavors. Remove from the heat and with an immersion blender, puree until smooth. Return to the heat and stir in enough milk to reach whatever consistency you like your cream soups. Adjust the seasoning with some additional salt and pepper and warm gently- do not boil.
at 8:32 PM