It started with a bag of peppers... 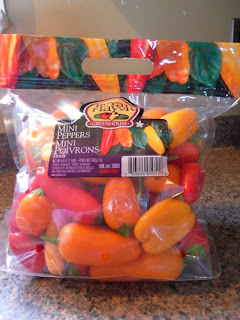 The two pound bag of wonderful that started it all... 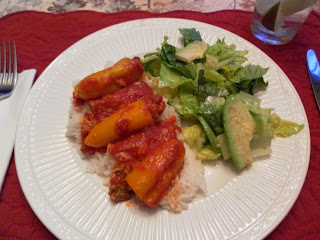 chilies rellanos con arroz blanco y ensalada aguacate
Mexican stuffed peppers with white rice and avocado salad
We were given a Costco membership for Christmas (thanks Becky!) and headed down after the new year to check it out (spending $60 we didn't need to while we were at it)...One of my "must have" purchases was a two pound bag of mini sweet peppers.  I know you've all heard it before, but sweet bell peppers (especially the red ones) are one of my all time favorite things to eat and there were just so darn cute (did I just say that food was cute?).  I decided in the produce aisle that I was going to make stuffed pepper, but figured on something reminiscent of those I grew up eating (hamburger and rice anyone?).


The peppers came home and were stashed away in the veggie bin for a few days, awaiting a free day to do some cooking.  In the meantime, my thoughts traveled to Italy and I decided to stuff the peppers with Italian sausage and top it all with fresh mozzarella.  Then I stopped at Kroger for a few things...and my thoughts traveled to Mexico (I'm an international traveler don't ya know).  What did I find on sale but chorizo links (smiling here), and knowing that I had queso chihuahua at home, chilies rellanos was now the direction I was going.


When you think of chilies rellanos you probably think of the ubiquitous breaded and deep fried ones found in most Mexican restaurants...but a chili rellano is really just a stuffed pepper (chili), usually with a tomato sauce, that can have a wide variety of fillings, may be fried (or not), and may even use chilies other than the traditional poblano...and the chilies themselves may be fresh, dried, or (gasp) canned. 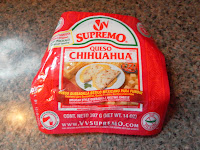 I mused several possibilities for my (finally) chosen direction, but decided to go as simply as possible and let the ingredients speak for themselves.  Three ingredients for the chilies, four for the sauce (and one of those was salt!) and we had for dinner a dish that Ben declared one of the most flavorful dishes he has had anywhere, at any time.  I must say I agree...this one is a keeper that I will be making again, and even though I've been really, really good about not getting seconds, with this one I just had too... 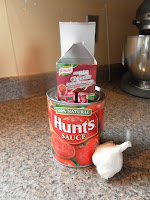 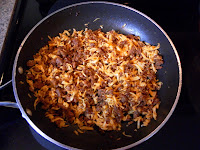 Brown the chorizo, breaking it up into fairly small bits; drain well and set aside to cool.  Cut off the tops of the chilies and pull out whatever little membrane and seeds are inside- I did as many as fit in a 9"x13" dish without crowding.  Simmer the tomato sauce with the chipotle, garlic and salt for 10-15 minutes to marry the flavors (and make sure the cubes are dissolved, if using).  While the sauce is simmering, toss the shredded cheese with the cooled chorizo to mix well.  Stuff the peppers, using the tip of your index finger to really pack in the filling, and set them aside on a plate...it won't be the end of the world if a pepper splits a little, you'll just put that side down in the dish. 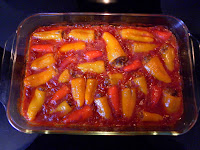 Spray a 9"x13" baking dish well with non-stick spray (the sauce will splatter a bit while baking and this will really ease your cleanup) and pour the tomato sauce into the bottom.  Lay in the stuffed chilies and place uncovered into a 350 degree oven.  Don't worry if it seems like a lot of sauce, it will reduce during cooking.  Bake for 40-45 minutes, or until the peppers are very tender and the sauce is thickened and bubbly.  Serve the chilies with white rice, spooning some of the sauce over the rice.