Did you have ham for the holidays? 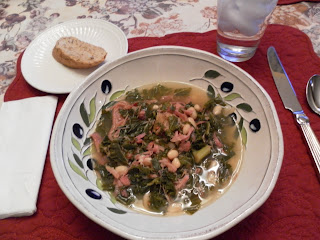 Kale and White Beans with Ham 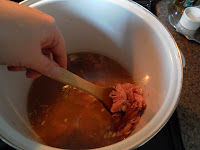 We had family over New Year's Eve for a late lunch/early dinner and enjoyed a delicious ham.  Once the family had departed and the cleanup was underway. I dropped the ham (with lots and lots of meat still on it) right into a stock pot.  I put in just enough water to cover and set the pot to simmer for an hour while I dealt with the house.  Before we started our House marathon for the evening (yes, we had an exciting evening planned :), I set the pot aside and let everything cool in the wonderfully rich broth.  During a break in episodes I took all the meat from the bone and shredded it back into the broth before stashing it away in the downstairs fridge. 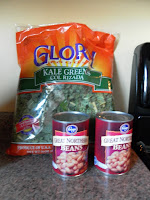 Fast forward three days later...I pull the pot from the fridge and scoop off the layer of fat that has collected and solidified at the top, and bring the whole thing to a boil- I figure there are 4 or 5 cups of broth- before adding a pound of kale, prewashed and cut curtoesy of Glory Foods.  Some seasonings, a simmer and some canned white beans and we had a whole pot of deliciousness.  The broth was so good I had to sop up every drop in my bowl with the crusty whole grain bread I bought just for the occasion.  This made so much that we ate half for dinner and I put the other half away in the freezer for one of those soon to be here again school nights when I don't feel like cooking. 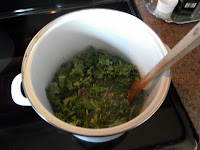 Bring the broth to a boil, add the kale, sugar, vinegar, a big pinch of salt, a generous grinding of pepper, and a sprinkle of pepper flakes (if using); bring to a boil again before reducing the heat, covering and simmering for an hour (or so)  Uncover and add the beans, draining only if you are worried about the sodium content or want a less soupy finish.  Simmer to warm the beans through and taste the broth to adjust the seasonings.  Serve in shallow bowls with crusty bread.
at 7:52 PM