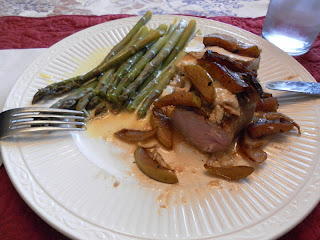 Except for being in the middle of a three day bout of vertigo, my Mother's Day was fabulous.  The boys did everything the whole day, bought me a nice little bunch pretty flowers (that still look great almost two weeks later :), and most impressively, worked together to make a fantastic meal.  They cheated a bit and bought a cheesecake, but that's okay, I'll forgive them :)

The brining produced and incredibly juicy and delicious pork chop while the sweet "pan sauce" was the perfect counterpart to the slightly salty brie.  We did not have any Calvados, so Ben subbed bourbon, and in doing it again I think I would keep the bourbon.  I did wish that there had been more apples, so a repeat will involve doubling the pan sauce (not really a sauce).  The Hollandaise was perfect but left Christopher complaining of a sore arm after all the whisking, but hey, how many 12 year old boys can say they can make Hollandaise?  The leftover sauce firmed up in the fridge and made a wonderful spread on breakfast bagels for the whole week following :)

For the brine and pork chops: Combine 2 cups water, brown sugar, vinegar, 2 tablespoons salt, garlic, peppercorns, thyme, mustard powder and red pepper flakes in a large saucepan and set over high heat. Bring to a simmer and stir until the sugar has dissolved. Remove from the heat and add the ice cubes to bring down the temperature. Once cooled and the ice cubes have dissolved, add to a resealable plastic container (or a plastic bag) and add the pork chops. Place in the fridge for 1 hour.

Tie each pork chop around the perimeter with a piece of kitchen twine. This will help the chop retain a nice, round shape while cooking.

Preheat the oven to 350 degrees F.

Remove the chops from the brine and pat dry with some paper towels (removing the excess moisture on the surface allows the pork chop to sear and caramelize). Sprinkle lightly with salt and pepper. Set a large cast-iron skillet over high heat. Coat the pan with oil and when the oil starts to smoke, add the pork chops to the pan. Cook over high heat until well browned, 8 to 10 minutes. Turn the chops over and reduce the heat slightly to allow the chops to cook through. Cook on the second side until golden brown, about 8 minutes. When done, remove the pork chops from the skillet and place onto a sheet tray. Divide the slices of the Brie between the chops and layer evenly on each so they are covered well. Place the sheet tray into the oven and cook until the Brie is just melted and the pork has cooked to 140 to 145 degrees F. Remove from the oven and transfer the chops to a plate to rest.

For the pan sauce: Meanwhile, place the skillet back over medium-high heat. Add a drizzle of olive oil and then add the apples and onions. Saute for 4 to 5 minutes, and then add the Calvados. Allow the alcohol to cook off (you can flambe at this stage if desired by igniting the Calvados in the pan). Once the Calvados has reduced, add the stock and simmer. Season with some salt and pepper. Allow to reduce for 2 to 3 minutes, and then remove from the heat and swirl in the cold butter cubes. This will thicken the sauce and give it a nice sheen. Serve the Brie-topped pork chops with the sauce.


Hollandaise Sauce
From Alton Brown and the Food Network


Pour 1-inch of water into a large saucepan; over medium heat, bring to a simmer. Once simmering, reduce the heat to low.
Place egg yolks and 1 teaspoon water in a medium mixing bowl and whisk until mixture lightens in color, approximately 1 to 2 minutes. Add the sugar and whisk for another 30 seconds.
Place the mixture over the simmering water and whisk constantly for 3 to 5 minutes, or until there is a clear line that is drawn in the mixture when you pull your whisk through, or the mixture coats the back of a spoon.
Remove the bowl from over the pan and gradually add the butter, 1 piece at a time, and whisk until all of the butter is incorporated. Place the bowl back over the simmering water occasionally so that it will be warm enough the melt the butter. Add the salt, lemon juice, and cayenne papper. Serve immediately or hold in a thermos to keep warm.
at 10:26 AM