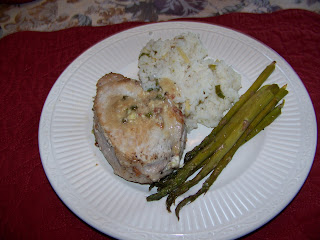 Bacon and Bleu Cheese Stuffed Pork Chop
with Garlic Smashed Potatoes and roasted Asparagus
Let me start by apologizing for that washed out photo...it does a terrible injustice to how delicious these chops turned out.  That said, I love it when whole pork loins go on sale.  I will buy one (or two) and make lots of good things to eat that week (and later, using freezer magic).
This was the end of a loin...I sliced off four nice thick chops and cubed up the (not so pretty) ends that I had left.  I knew I wanted stuffed chops (darn influence of the Triple D), but was unsure what direction I wanted to go...sweet and fruity, "regular" stuffing, cornbread, or something savory and cheesey.  Savory and cheesey (and a bit salty) won out.  These pork chopped were delicious served with garlic smashed potatoes and roasted asparagus.  The pan juices were spooned over the chops and potatoes for dining decadence...yum, yum, yum. 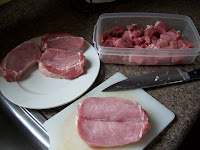 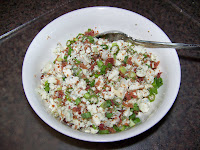 Preheat the oven to 350 degrees F.  Fry the bacon in a cast iron skillet or other heavy bottomed pan; drain and crumble, reserving the drippings in the pan.  Mix together the cheese, bacon, and chopped scallion; set aside.  season both sides of the chops generously with the salt and pepper.  Using a large knife, butterfly the chop without cutting all the way through. 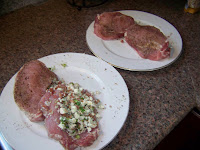 Spoon 1/4 of the cheese mixture onto one half of each butterflied chop.  Pull the other half over to cover, stretching it a bit as necessary (this is easier than you may think); secure with wood toothpicks to close. I used two toothpicks on each chop, just be careful that both ends of the pick are left exposed for easy removal later. 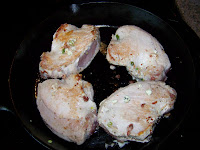 Heat the pan and drippings over medium high heat until very hot.  Sear the chops on each side until nice and brown (I unfortunately did not let my pan get hot enough, so did not get the hard sear I wanted).  Place the pan in the oven and roast for 25 minutes, or until the pork is just barely cooked through and the stuffing is all oozy.  Remove the chops to a plate, cover with foil, and let rest.  Place the pan back on a burner over medium high heat and deglaze using the wine or stock.  Scrape up any brown bits and loose stuffing and boil a few minutes to reduce slightly.  Spoon this pan sauce over the pork (and potatoes if you are having them) and serve.
at 12:14 PM