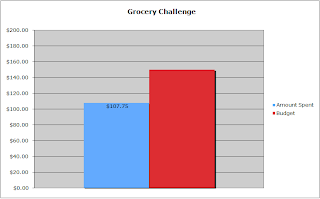 Here's the tally for week 6:

I was a little disheartened that last week's total was over budget,and decided Sunday evening that I would forgo shopping as long as I could this week, and cook from what I already had on hand (in the fridge, freezer, and pantry).  When I mentioned this to Ben his comment was "Oh, no," but I assured him that I had plenty on hand.  The trip to Wal-Mart earlier in the day had been his, and he had purchased deodorant, soap, coffee (the best price for the 8 O'clock Coffee we like), and Draino.  He said, "You're not counting all that in the budget are you?"  I said that, yes, I was, except for maybe the Draino, which I think I can justify as a "household" expense.

Well, the vow not to shop lasted until Monday morning.  We had a cub scout pack meeting Monday night, and I was responsible for providing the beverages.  It seemed a shame to make a trip to Kroger without making the "bargain round."  So I did.  I picked up the macaroni salad we had with dinner Monday night, the turkey brats and hoagie rolls we had Tuesday night, and a few other things.  I also renewed my vow vot to return unless I needed to.

I was doing really well until Friday when the realization hit me that we were having company for the weekend....but, even after the trip to Kroger and Aldi, and the purchase of ample quantities of beverage, I was still under for the week, so all was okay.

I am wrapping up this project with this post, but this short endeavor has certainly been worthwhile.  I am more conscious of what I am putting in my cart and what it will cost when I get to the checkout, but more importantly, I have a good idea now how the grocery dollars are being spent.  I know that, if needed, I could cut our weekly grocery spending to $100, or less, and we would still eat very well (very, very important!!).  I also know that if I needed to budget, that I would need to do it on a weekly basis, because while I averaged being "under" for a one month period, it was only because of the weekly gauge on spending.
at 8:03 AM