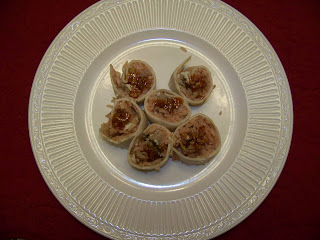 Yesterday was Ben's birthday, and we had intended to go to BD's Mongolian BBQ for dinner, but instead, Ben came down with the flu. Mind you, he made it through the whole month of October, when Chris and I were ill for so long (well, me anyway, the kiddo rebounded quickly). Ben could not even face a bowl of soup and with the other kids not home, Chris and I were on our own. He decided that he wanted Mexican again (thank goodness for those leftovers). With the little guy having spoken, that is what we had. Chris took tortillas and layered them with rice, the carnitas shreds, and cotija cheese, before rolling them up and having me slice them into rolls for him. Declaring them delicious, he called these rolls "Mexican Sushi," and was so proud of them he wanted me to take a picture and put it here to share. Notice the dribble of taco sauce on top - he said that was like his "wasabi paste." Gotta love the cuteness of the whole thing.

While on the subject of leftovers, Ben and I had a really delicious lunch (before he got sick) made from the leftover cide 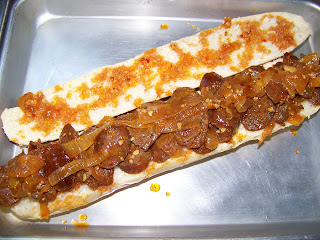 r braised chorizo. I crisped up a small baguette in the oven before slicing it horizontally. On the bottom half I layered the remaining chorizo and onions (warmed in the microwave), and 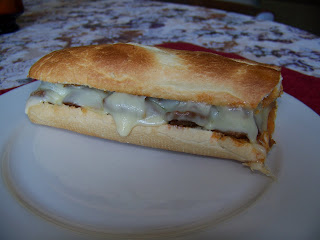 dribbled some of the juices over the top half. After adding sliced Swiss, I put the top on and warmed the whole thing in the oven until the cheeses melted and the sandwich was crisp. The resulting "bullet" sandwich was super tasty and a great way to finish those leftovers (as well as provide an easy, no fuss lunch).
at 10:28 AM