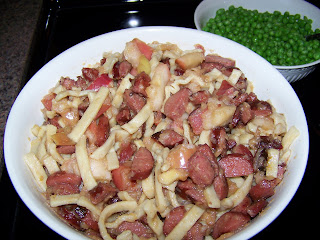 With Chris and I on our own for dinner again last night, and a basketful of bargain apples in the pantry, I thought it would be a good time to make a dish that the kids all love, but Ben won't eat, cinnamon apples with noodles and smoked sausage. I came up with this dish when Nicole and Matt were quite young (thus, before the Christopher), and it has been a kid favorite ever since. Nicole even called from school a few weeks ago wanting to know how to make it. She will be coming home this weekend to watch Chris for us, so I decided to make enough that she could take the leftovers back to school with her. Chris and I also decided to eat steamed green peas with our dinner - another thing his dad won't eat. I like to say that I haven't met a vegetable I didn't like (except beets and fennel that is).

I can really only give general guidance on this one- the quantity & type of apples used is for you to decide, although I do like to use a mix of apples as some apples break down more with cooking, and this leaves a nice variety of texture. The amount of sweetener used is personal preference, and while I use brown sugar, I imagine a lo-cal sweetener would work too. I have added apple juice before when the apples have seemed a little dry in the pan, so that is another variable
What is great about this dish is that YOU control what is in it. Chris really likes the cinnamon apples at Chili's, but I can't help but think they are not very good for him. When I make my own I know what he is eating. Leftover apples with noodles are also good for breakfast, and the basic cinnamon apples make a great breakfast topper for hot biscuits, or just about anything else. 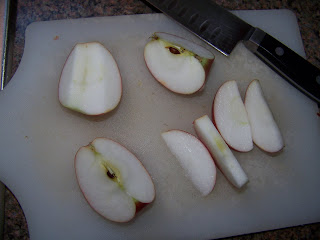 Wash and dry the apples well. Quarter lengthwise and cut out the core, but leav 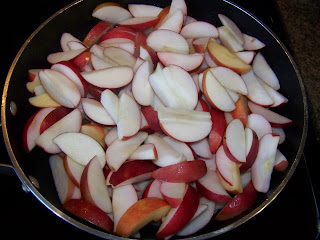 e the peel (this adds not only nutrition, but also color and texture, plus, it's easier). Slice the quarters and toss the slices with a little lemon juice as you work; this not only prevents browning, but adds a nice contrasting tartness under the sweetness of the dish. Melt some butter in a large non0stick saute pan over med-high heat; swirl to coat the bottom before pouring in the apple slices. Let cook for several minutes before stirring. Turn the heat down to medium and continue to cook until the apples start to soften and release their juices- if the apples seem dry, which they might if you are using a lot of Granny 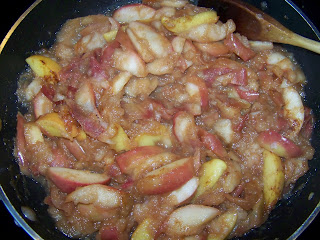 Smiths, add a little apple juice, cider, or water. Once the apples are softened and juicy, add the sweetener of choice, not too much all at once, you can always add more. Add the cinnamon at this time, start with about a tablespoon, you can add more later. Cook until the juices are thickened, tasting for sweetness and cinnamon along the way. Don't worry if some of the apple slices seem to dissolve into the juices, this is a good thing.

Slice the smoked sausage into thin half rounds; saute over med-high heat until browned; remove to another dish with a slotted spoon and set aside. If making the apples for the purpose of this dish, use the 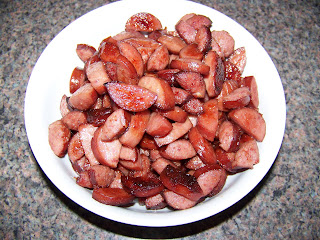 drippings in the pan to cook the apples (whether you add the butter as well is completely up to you - I did). Cook the egg noodles according to package directions. I like to use a substantial noodle 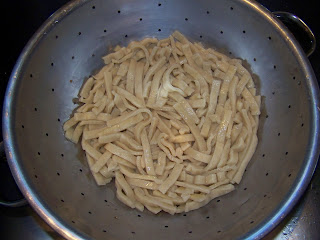