We spent last Christmas in Minneapolis where my sister-in-law lives (after having lived in Miami, Florida - six years later and I'm still trying to wrap my mind around that one). During the one (very cold) week we spent there, we ate at many very good restaurants, but one in particular stands out in my mind. We like to watch the show Diners, Drive-ins, and Dives, which, by coincidence, has featured many restaurants in the Minneapolis area. One episode featured Town Talk Diner, a very retro cool establishment, but what made my husband really want to go there was some huge burger involving sauerkraut, and a cocktail made with bacon infused whiskey (yes, I did say bacon). The opportunity presented itself one evening to have dinner there, so obviously we jumped on it. The diner was certainly very cool, and the waitress was full of attitude (in a very friendly way) that very much suited the place. We had frickles and cheese curds to start (fried pickles and cheese), Ben got his burger and I ordered the bleu cheese meatloaf (unfortunately no longer on the menu); both were absolutely finger licking delicious. Ben ordered his bacon whiskey drink which, unfortunately, did not live up to the hype (Ben's dad even slid his over Ben's way for him to finish). I however, ordered a cocktail made with habanero infused scotch and a mango syrup; loving spicy and sweet together, this was one I had to try. IT WAS GOOD, or at least to my reckoning it was. It was passed around the table, and all but Ben and I deemed it too warm for comfort, but I truly liked it a lot and vowed to try to make it at home.

Well, almost a year later, I still occasionally think about that cocktail, so 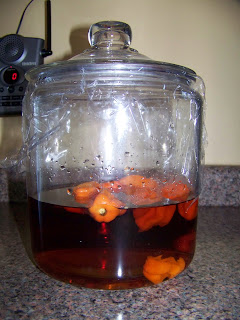 it's finally time I do something about it (other than make that 15 hour drive to hell and back - that - could be the subject of a very long entry all of its own!). I took 2 bottles of inexpensive Canadian scotch from the grocery and poured them into a large sterilized jar. I took ten (10!!) habaneros, cut several small slits into each, and blanched in boiling water for several seconds. I drained the chilies and dropped them into the jar with the scotch, covered the jar in plastic wrap, and put on the lid. I am going to store this jar in the basement until the holidays, and after I have made myself a cocktail (or two) I shall report back on the results. Fingers crossed it is as good as I remember :) Here's the link to Town Talk if you would like to check it out for yourself : http://www.towntalkdiner.com/
at 1:24 PM