Wow, it has been a while.  I won't bore you with the details, just suffice to say that I've been really, really busy, but I never forgot about any of you.  Here's to some more time spent together and I'll try to do better about posting :)

I was kidding Ben earlier this week that he wasn't getting anything for father's Day since Nicole's graduation had fallen on Mother's Day, making us otherwise occupied.  Well, I fibbed, because I just can't resist a reason for a celebration...especially when we are celebrating my dearest other half.  It was a rainy day, meaning no grill (big sigh here), so I got out the next best thing, my cast iron skillet, and seared up some sweet and spicy pork chops for the daddy grub.  Chris has been bugging me for some time to make a coconut cake, and as he is his daddy's little double, I honored that request today.

This cake starts with a white cake mix in a box.  For this, I offer no apologies.  I have never claimed to be a baker of great talent, so why not use the mix when I'm not going to be able to make something better.  This cake is a riff on tres leches, or three milk cake.  Despite the use of Coco Lopez, a sweetened coconut cream, and sweetened shredded coconut, this cake is not overly sweet, nor is the coconut flavor so strong it tastes fake (you know what I mean).  I will be making this one again soon! 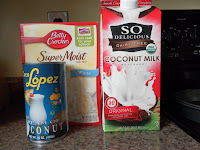 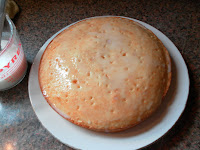 Prepare the cake mix as directed, substituting unsweetened coconut milk for the water.  The cake may be made in any form you like; I used two 9" rounds.  Once the cake(s) have cooled to room temperature, place on a plate and poke all over with a wood skewer, going all the way through the cake.  Thin 1/2 cup of the cream of coconut with 1/2 cup of the coconut milk.  Spread some of the coconut mixture over the top of the cake, letting it soak in and don't worry if it runs down the sides.  Once this is absorbed, spread on some more and repeat until all the coconut mixture is used (this may take a while).  With this amount of liquid the cake will be very moist, but not "wet" like tres leches cake sometimes is. 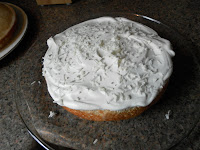 Whip the cup of cream until stiff peaks form; fold in 1/4 cup of the coconut cream and taste for sweetness.  Add a bit more if desired, but be careful to leave the cream "spreadable."  If doing a layer cake, invert one layer rounded top down onto the serving plate and spread a few spoonfuls of the whipped cream over the newly flat "top."  Sprinkle on a handful of the shredded coconut if desired (I did).  Carefully place the second layer, rounded side up, on top of the first and frost the cake with the remaining coconut whipped cream (I just spread mine on with a butter knife, but please feel free to pipe it on if you like).  Sprinkle some of the shredded coconut over the top and refrigerate for several hours before serving.  I did not toast the coconut first, but I will when I make this cake again. 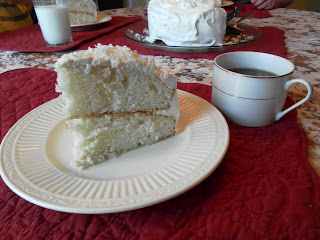 Oh so nice with a cup of coffee (or glass of milk if you're Christopher).  Ben and Chris both were so kind to point out that i was serving white cake on a white plate (and with white cups!)...guess I'll have to rectify that and buy some more dishes :)

*I use coconut milk from the carton, but if you won't have a use for that much coconut milk use canned coconut milk instead.  I also made coconut rice from this carton and will drink what is left...I LOVE coconut milk, something I unfortunately can't say about the kind that comes from a cow :(
at 11:15 PM