Build your own pizza bar...

I was on Facebook last Friday when I came across a photo of flatbread pizza shared by a friend.  The pizza looked delish, and it included a caption declaring it was only 8 points under Weight Watchers PointsPlus.  Ben and I had been on the program for almost a month and pizza was one of those things that we figured we would have later, after we dropped "enough" weight (whatever that meant).  The photo also included the link to the blog post it came from. The recipe called for Flatout brand flatbreads and purchased pesto.  It so happened that I had a package of sundried tomato Flatout bread in the fridge and a container of Buitoni pesto in the freezer.  I was set.

I didn't stop there, however.  I also had a tasty prepared pasta sauce, Hormel turkey pepperoni, and assorted veggie choices.  We would have a make your own pizza bar, being as good, or indulgent, as we desired.  These were so GOOD, and so easy; I will be keeping Flatout bread around for weeknight dinner (or pizza craving) emergencies from now on.

Make Your Own Flatbread Pizza

Preheat the oven to 400 degrees F.  Lay the flatbread(s) on a baking sheet, topping as desired.  Bake for 10 minutes, slice into pieces, and eat.  The family only made two at a time so I can't say if having multiple baking sheets in the oven would work.  I would rotate the sheets halfway through baking if trying this. 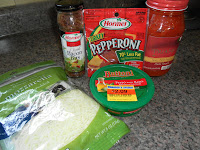 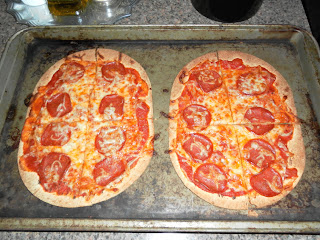 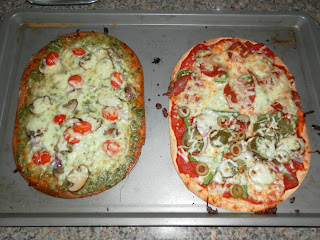 On the left is pesto (2 T!!), tomatoes, mushrooms, red onion, and cheese.  The pizza on the right used sauce and went "halfsies," with one half a "veggie deluxe" and the other with pepperoni and fresh jalapeño. 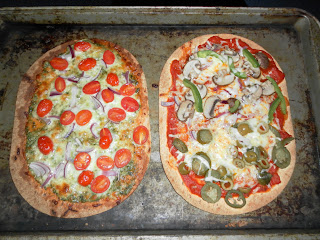 On the left is pesto (a moderate 1 T), tomatoes, red onion, and cheese.  Think a baked caprese salad.  The pizza on the right has sauce and has also gone halfsies.  One half is mixed veg while the other is a "salty" pizza (as we call it) of green olives and pickled jalapeños.
at 4:25 PM