I was really craving Dan Dan Noodles from PF Chang.  I sure wasn't leaving the house on a bitterly cold January day to drive to a neighboring city to get them, and although I have recreated them at home, I was lacking the Chinese egg noodles, bean sprouts, and cucumbers to do so (ditto on the not leaving the house).  But cravings be damned, I was going to have those noodles, I was just going to have to use what I had on hand. And what I did have on hand was two pounds of ground turkey, so I decided to double my effort with the intention of repurposing the leftovers. 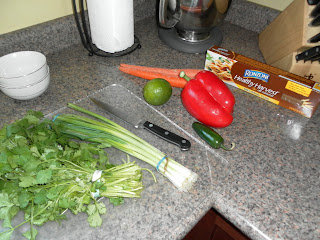 For the Chinese egg noodles I subbed whole wheat linguine, a substitute I think I'll keep on purpose in the future.  Instead of the bean sprouts and cucumber I used fresh lime, red bell pepper, cilantro, and jalapeño. Close enough of government work and it turned out damn tasty. 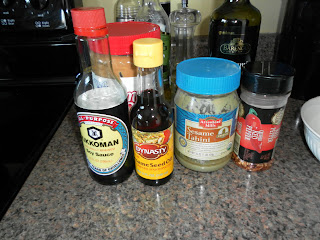 I thought I was going to have to use some peanut butter for the tahini, but ended up being able to scrape some out of the jar and just bumped up the amount of sesame oil. 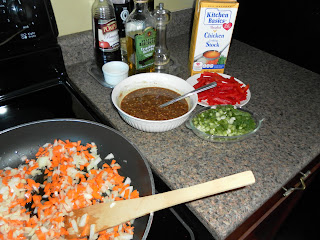 I like to get everything prepped and in place before I ever start cooking, or mise en place.  I had originally planned to make the sauce with chicken stock, but ended up using pasta water instead. 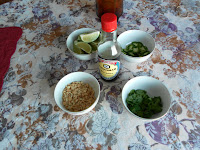 Combine the first 8 ingredients in a bowl and set aside. In a large nonstick saute pan, cook the ground  turkey with the onion and carrots until there is no pink left in the meat, breaking up any large clumps.  Pour in the sauce ingredients, bring to a boil, then reduce the heat, add the red bell pepper strips,and simmer while you cook the linguine according to package directions.  As the pasta finishes, ladle some of the pasta water into the turkey to achieve the desired consistency, stir inn the sliced scallions.  Portion the noodles into shallow bowls and spoon the turkey and its liquid over the top.  Serve topped with desired accompaniments. 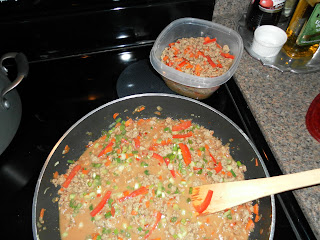 I doubled this recipe and removed half, leaving the liquid behind (better for the noodles to soak up, yum).  Later in the week I reheated this before spooning it into soft tortillas and topping with crumbled queso fresco and one of my favorite additions, a mix of chopped onion and fresh cilantro.  A side of beans and a bit of hot sauce and my Asian fusion tacos were ready for dinner. 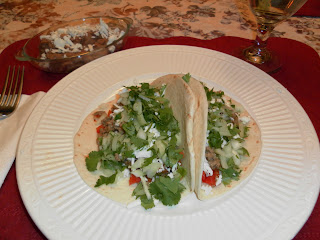