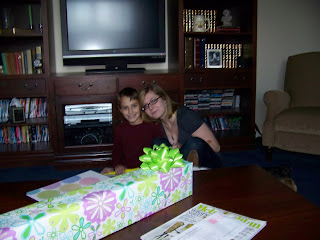 Chris & Nicole before her birthday dinner


We went to dinner last night at SoHo Japanese Bistro in West Chester to celebrate Nicole's birthday. SoHo is one of our favorite restaurants for celebration meals, but we usually dine at a tepanyaki grill, finding that the antics of the chefs are nearly as enjoyable as the meal. Tonight however, we were seated next to the waterfall and the pond filled with koi. Nicole has been pestering me for some time to try sushi, and tonight was to be the night. Needless to say, I tried it, and I loved it, especially the spicy tuna and one with eel and salmon (the tried and true California Roll you ask, well, meh...).

Christipher was the real surprise of the evening. When he first looked at the menu he wanted chicken fingers, but on a second perusal he wanted to know what a bento box was. Much intrigued by the idea of little boxes of food contained witin a larger box, he decided to order one. We ordered sushi rolls to start the meal, and without any prodding what so ever, Chris (age 9) had sushi for the first time the same night as mom. He thought the Philly roll with cream cheese was okay, but was really enamored with the California roll and ate three pieces! Nicole orded wakame (seaweed) salad and I ordered steamed and salted edaname- Chris tried and loved both (and finished my leftovers with lunch today). Then Christopher's bento box arrived and what a happy boy he was. The breaded shrimp and chicken were both tried and trues, as was the steamed rice, but included in his box were three more kinds of sushi- nigiri rolls of shrimp, crab, and egg- and pickled ginger. Again the boy dived right in and declared evrything delicious, even the ginger.

The night was very enjoyableand we ended the evening with birthday cake at home. Now Chris wants two bento boxes of his own, a nice laqured one like he had at SoHo for use at home, and a plastic lidded one for packing his school lunch...AND he wants to know when we are getting sushi again- the budding gormand makes my mother's heart proud :) 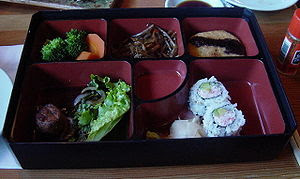