I don't order ribs in restaurants (gasp!)...I know, I'm weird, but I don't fancy the prospect of eating these messy things in public, and quite possibly (especially for me) ending up "wearing" my dinner.  That said, I've never made ribs at home either...oh, sure, I've made the "country" style ribs, but those aren't really ribs, are they?...and whenever we have had a rib urge, have subsisted on packaged Montgomery Inn ribs from the grocery.

This week I found a huge pork sparerib rack at Kroger for $1.19 a pound and decided it was time for us to give this whole rib thing a try.  An internet search revealed a plethora of cooking methods, and I ultimately decided roasting them in the oven (at a higher temp. and shorter time than recommended by many) with a dry rub, and finishing them on the grill with BBQ sauce.  I came up with a basic rub that added a fantastic taste, and crust, to the ribs (some cayenne added to the rub would have been good too).  I had planned on making my own BBQ sauce as well, but learned that one should not take off for the shower without remembering to turn the heat down under the sauce...how was it that Ben put it?..."It doesn't smell so good anymore."  Jack Daniels Original No. 7 to the rescue (my favorite bottled sauce).  These ribs were delicious and tender, but with a crisp crust from the rub (my favorite part) that was saltier than expected (but not in a bad way, just unexpected) considering the amount of salt to all the other ingredients.  Ben was figuring how he would like to change the grilling end a bit to be able to get more sauce baked on them, but all an all, especially for a first attempt, these were outstanding. 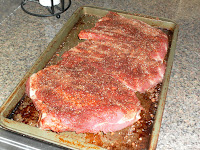 The day before you plan to have them, take the rib rack and cut into smaller pieces (if you wish) for easier handling.  Remove the silver skin and rub both sides of the pieces with the rub (use it all).  Wrap with plastic wrap and refrigerate until needed.

Preheat the oven to 350 degrees F and line a large roasting pan with foil (don't skip this, was the sugar and drippings will bake onto this instead of your pan).  Place the ribs in the pan, fat side up, and roast for 45 minutes, turn over and roast an additional 45 minutes.  The smell will be fantastic, and when you remove them from the oven, the meat may already be pulling away from the bone.

Finish the ribs on the grill, slathering with a liberal amount of your favorite BBQ sauce.  You may also wish to throw some wood chips on the grill to give the ribs a smokey touch...Ben used hickory chips, and I'm oh so glad he did.  Once all the BBQ sauce is nicely cooked onto the ribs, bring them in, cut between the bones into 1 or 2 rib portions, pile them up on a platter.  Now take them to the table with a big pile of napkins.  This huge rack (4+ lbs.) served four.